Editor's note: CNN field producer Victoria Eastwood traveled to Eastern Ukraine to report on the devastation of Malaysia Airlines Flight 17 with Chris Cuomo, co-anchor of CNN's "New Day." From there they went to Amsterdam's Schiphol airport where the flight originated. Here's a look at how the trip affected them.

END_OF_DOCUMENT_TOKEN_TO_BE_REPLACED 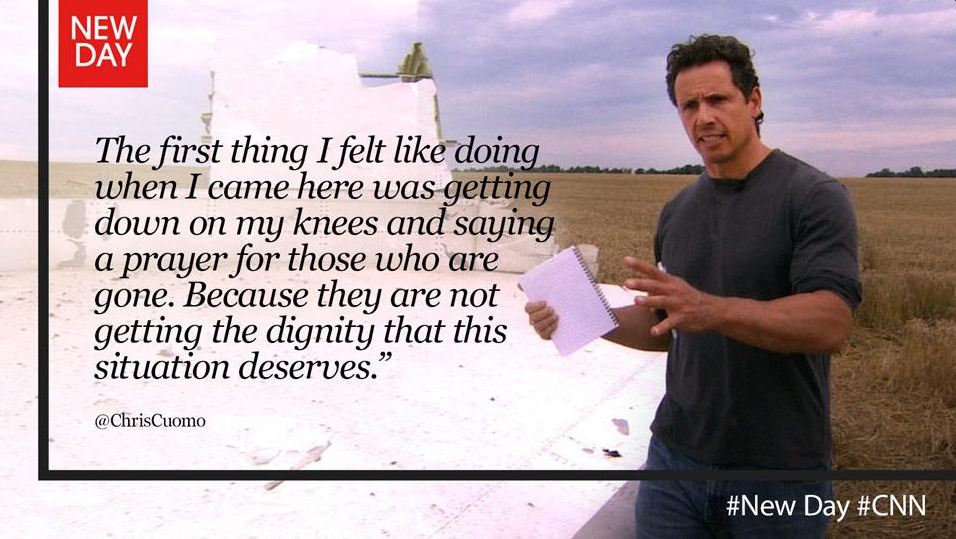 CNN's Chris Cuomo and his team are reporting on the ground in the embattled region of eastern Ukraine in the wake of the downing of Malaysia Airlines Flight 17 last Thursday.

For the latest updates and images of the MH17 crash site, follow Chris, his producer and videographer in Ukraine.

You can also see Chris' Facebook album for more images from his reporting.

Makeshift memorial with candles, stuffed toys and other items in honor of the deceased. (Photo: Woj Treszczynski)

It’s pretty rare that I get truly excited about meeting someone I’m working on a story about.  OK, meeting Vice President Joe Biden was pretty cool.  So was meeting Matt Damon. But I can honestly say I’ve never met anyone in my life as remarkable as Sgt. 1st Class Cory Remsburg. (Sorry, Joe and Matt.)

Before President Obama’s State of the Union Address last month, like many others, I hadn’t heard about Cory’s story. I watched the speech from my desk at “New Day” and found myself moved by what the President had to say about this 30-year-old Army Ranger.

“Cory Remsburg never gives up, and he does not quit,” Obama said, followed by nearly two full minutes of uninterrupted applause and cheering. Both sides of Congress, the Joint Chiefs of Staff and everyone else in the room were on their feet to show their appreciation for not only Remsburg, but for what he represents as a veteran who returned home from war seriously injured. Some wiped tears from their eyes.

It struck me that cheering for Remsburg was something - even in this deeply politically divided country - that everyone could agree upon.  Even if it was just for two minutes.

When I learned that I would be producing a profile of his journey, I was a little nervous.  Not nervous about meeting him, but about doing his story justice.