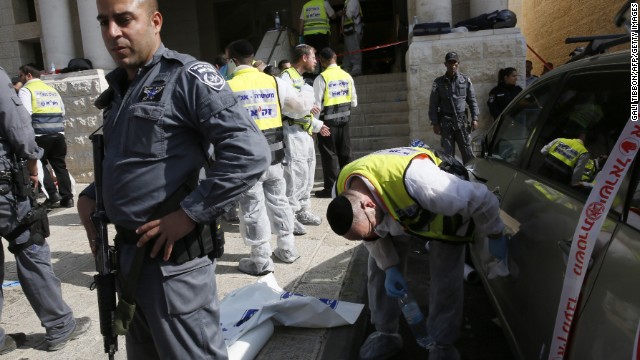 Israeli police say four people were killed by knife-wielding men at a synagogue in Jerusalem on Tuesday.
November 18th, 2014
06:19 AM ET

State of emergency: As the country waits for a grand jury's decision on whether to indict the officer who killed Michael Brown, Missouri has both called in the National Guard and has diminished the role of the Ferguson Police Department. Missouri Gov. Jay Nixon declared a state of emergency Monday as a precaution, he said, in the event of unrest or violence.

Who are you calling a terrorist? A Navy veteran in Missouri said he was fired from his hotel job and called a terrorist for posting pictures to Facebook of Homeland Security vehicles massing near Ferguson. "The head of security for Drury was in there, and he pretty much called me a terrorist, saying that I dishonorably served my country for posting those pictures and videos on Facebook," Mark Paffrath said. The Drury Hotel said it couldn't comment on the case.

Slippery economy: So Japan has slipped into a recession. And the prime ministers says he's going to dissolve parliament and call for snap elections. What does all this mean?

COSBY ACCUSER
Another woman comes forward: A woman told CNN's Don Lemon that Bill Cosby sexually assaulted her 45 years ago, when she was a teenager. Joan Tarshis, a journalist and publicist, said she met Cosby in 1969 in Los Angeles when she was invited to have lunch by some friends of his. "I woke up or came to very groggily with him removing my underwear," she said of one alleged incident. Cosby has repeatedly said the allegations are untrue, and he has never been prosecuted.

Leave a Reply to C