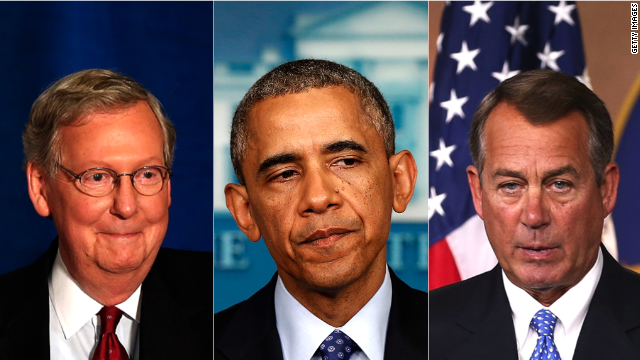 President Obama now finds himself surrounded by Republican majorities in both the House and the Senate.
November 5th, 2014
02:22 AM ET

Murder charge: A 6-year-old boy was found dead in the frigid waters of Oregon's Yaquina Bay after his mother told police she tossed him off a bridge. Authorities said they found the body of London McCabe about a mile from the bridge, about four hours after his mother called 911 Monday evening to say she'd thrown him from the span. The mother, Jillian Meredith McCabe, 34, was arrested on charges of aggravated murder, murder and first-degree manslaughter, Newport police said.

Plea deal: NFL star Adrian Peterson pleaded no contest yesterday in a Texas court to one count of misdemeanor reckless assault, avoiding jail time for whipping one of his children. As part of a plea agreement, the Minnesota Vikings star was sentenced to two years of probation, a $4,000 fine and 80 hours of community service. He'll record public service announcements to eat up half of that community service time. He also will take parenting classes.

Drop that plate: Arnold Abbott handed out four plates of food to homeless people in a South Florida park. Then police stopped the 90-year-old from serving up another bite. Abbott and two pastors in Fort Lauderdale, Florida, were charged for feeding the homeless in public Sunday, the city's first crackdowns under a new ordinance banning public food sharing, CNN affiliate WPLG reported. Now they face possible jail time and a $500 fine, WPLG said. Abbott says he'll take the city to court.

- Feather and a bowling ball: When you get rid of all the air, this is what happens.

- How 'bout a hot dog? Milo the dachshund may look snack-sized to us, but is best buddies with this "King of the Beasts."
https://www.youtube.com/watch?v=-b-VQI5smMI

- Record-breaking golf club: Sometimes you just have to break out the long clubs. Michael Furrh set a Guinness World Record this week by swinging a 20-foot, 6-inch driver.

- Baby on board: Mara the hippopotamus surprised officials at the Los Angeles Zoo.

- Getting to the bottom of things: We hate to make anyone the butt of our jokes, but ... the person voting next to Missouri Gov. Jay Nixon yesterday kind of stole the show.

Get your butts to the polls. RT @GovJayNixon Voting in #JCMO this morning. Make sure to cast your ballot pic.twitter.com/nRANW09jdF