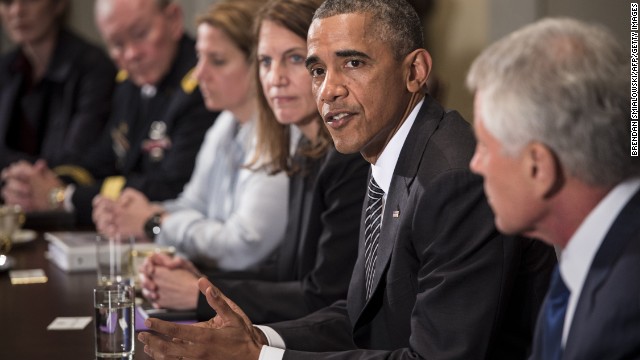 President Obama meets with his cabinet after a second case of Ebola is contracted in the United States
October 16th, 2014
04:56 AM ET

Five Things to Know for Your New Day – Thursday, October 16

A Texas hospital apologizes for Ebola mistakes. A Seattle megachurch pastor calls it quits. And Apple rolls out its latest gadgets.

Dallas hospital apology: The Texas hospital where an Ebola patient died and two nurses became infected is apologizing for mistakes made when first confronted with the deadly virus. Dr. Daniel Varga said the hospital mishandled the case of Thomas Eric Duncan, the Ebola patient who was originally sent home from Texas Presbyterian Health hospital even after he had a fever and said he was from Liberia. "We did not correctly diagnose his symptoms as those of Ebola. We are deeply sorry." Days after Duncan returned to the hospital, he died from the virus. One of the Texas nurses is being treated in Dallas, the other in Atlanta.

NBC freelance cameraman Ashoka Mukpo, who's recovering from Ebola at the Nebraska Medical Center, extended encouragement to the Texas nurses.

Wishing for a speedy recovery for those two Dallas nurses. This thing is not easy but you're both going to make it. Thanks for your bravery

Leaving his flock: Mark Driscoll is out as pastor of Mars Hill Church in Seattle. The megachurch has 15 satellite locations around the area and a couple of universities. Driscoll's resignation came as a surprise, according to the church board. In a statement, Mars Hill's board of overseers said Driscoll hadn't committed any acts of "immorality, illegality or heresy" - sins that have taken down many a powerful pastor. Instead, the board said, Driscoll was guilty of "arrogance, responding to conflict with a quick temper and harsh speech, and leading the staff and elders in a domineering manner," prompting some church leaders to flee the congregation.

Hitting the trifecta: Neil Patrick Harris will host the Academy Awards in February. The revelation came in a video he blasted across social media yesterday (see it below). These awards shows are becoming old hat for NPH. He's already hosted the Tonys four times and Emmys twice to rave reviews. The Academy Awards will air February 22.

Core mistake: Apple tries very hard to keep its big announcements secret. The latest culprit responsible for ruining one of the tech company's surprises is, well, Apple. Yesterday, a full day ahead of today's media event at its Cupertino, California, headquarters, the company accidentally leaked key details about new iPads in iTunes. But don't worry, CEO Tim Cook and crew will still have plenty to talk about at the news conference. Apple is expected to announce new Macs and discuss the latest Apple Pay and OS X Yosemite release dates. CNN will be there to bring you all the techy details.

Long time coming: It's been a few years, but Kansas City is back in the World Series. And by a few years, we mean nearly three decades. The Royals completed a four-game sweep of Baltimore last night, beating the Orioles 2-1. The last time KC played in the Fall Classic was 1985. The Royals, the American League champs, will play the National League winner. San Francisco leads St. Louis in that best-of-seven series 3-1.

–Birdseye view: The green pastures of southwest Germany spread out before us in this glider-cam video.

- No longer nameless: The red panda twins at Lincoln's Children's Zoo now have names. These adorable critters will be known as Carson and Willa after a couple of Nebraska icons: "Tonight Show" host Johnny Carson and author Willa Cather.

- Space mystery: Some folks claim to see a UFO at the 1:51 mark in this spacewalk video. What do you think?

- Puppies saved: We give this video two paws up. A man in Thailand crawls into a sewer pipe to rescue four little hounds.

Leave a Reply to That Guy