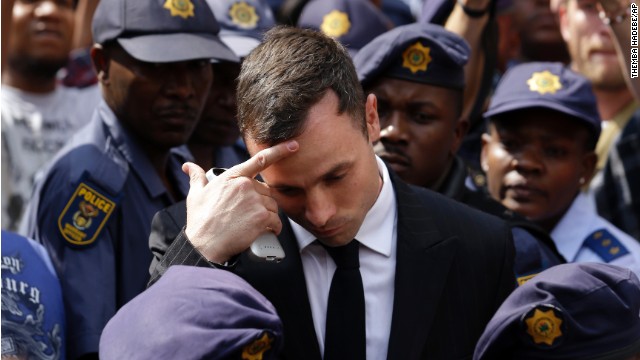 It's day three of the Oscar Pistorius sentencing hearing. When will the fallen Olympics star find out his fate?
October 15th, 2014
01:37 AM ET

Five Things to Know for Your New Day – Wednesday, October 15

More bad news in the fight against Ebola. Female employees at Facebook and Apple like a benefit. And Oscar Pistorius' sentencing hearing enters day three.

More bad news: A union made troubling allegations yesterday about the Texas hospital where a nurse contracted Ebola, claiming "guidelines were constantly changing" and "there were no protocols" on how to deal with the deadly virus. But a hospital spokesman said patient and employee safety is the hospital's top priority. Meanwhile, the WHO warned there could be 10,000 new Ebola cases per week in Guinea, Liberia and Sierra Leone by the end of this year.

Female employees like this: Facebook and Apple have good news for their female employees: They will pay to freeze your eggs. Facebook is already covering the procedure as part of its insurance benefits, while Apple plans to offer coverage starting in January. The practice allows women to put their fertility on hold so they can still have children later in life.

Getting violent: Hong Kong police arrested dozens and moved to stop protesters from reoccupying a major road outside the government headquarters. Pro-democracy protesters repelled the first police attempt to move them, encircling officers who fired pepper spray before retreating from the epicenter of the standoff.

4. TEXAS ABORTION CLINICS
Staying open for now: The Supreme Court ordered Texas not to enforce a law that had effectively shut down several clinics that provide abortions. The court's order means those clinics can reopen immediately. The restrictions had gone into effect in recent days, but a number of abortion rights supporters asked the justices to intervene on an emergency basis.

Track star's sentencing: It's day three of Oscar Pistorius' sentencing hearing.  When will we find out his fate? In the next few days. Meanwhile, new details emerged at the hearing, including the fact that Pistorius offered a large sum of money to the parents of his girlfriend, Reeva Steenkamp, after he killed her. The family rejected it as "blood money" but accepted monthly payments, a prosecutor said.

- Game goes to the dog: This adorable pooch interrupted a soccer match for some belly rubs. If ever there was a reason to stop a game, this is it.

- Kitty evolution: A cat bounces on two legs. Let's just say the other two legs are just an accessory.

- Who wins this battle of the drums? U.S. Marines take on South Korea in the military version of drumline. May the U.S. - er we mean best men - win.

- Thinking outside the wheel: This must be the laziest or most drunk hamster ever. On second thought, let's go with most creative.

- Likes her veggies: Michelle Obama is getting turnt up - with a turnip.  And it's amazing.  #turndownforwhat