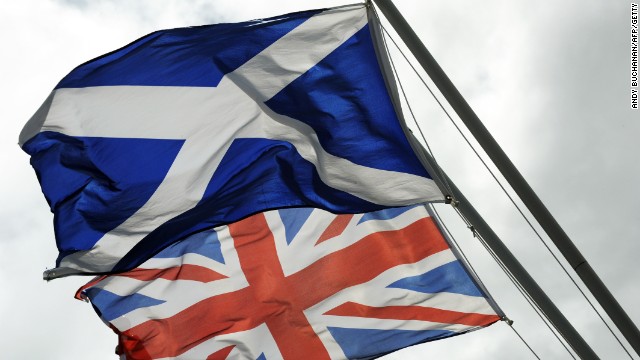 Scottish voters cast ballots today on whether to leave the United Kingdom.
September 18th, 2014
04:22 AM ET

The Senate votes today on funding and training for Syrian rebels. Scotland decides on independence from the United Kingdom. And Atlanta's airport flies high again.

Now the Senate votes: While ISIS militants keep trying to spread their radical Islamist rule in Syria and Iraq, a slew of U.S. officials are scrambling to find the best way to stop them. After the House approved President Barack Obama's plan to arm and train Syrian rebels in the fight against ISIS, a Senate vote on the same measure could come as early as today. But passage in the House didn't come easily. More than one-third of the House opposed the measure; many Republicans said the strategy isn't tough enough to defeat ISIS, while many Democrats worry the plan could drag the United States into another long military engagement.

PR problem: The bad news kept piling on the National Football League on Wednesday with the arrest of an Arizona Cardinals player. Police in Phoenix arrested Jonathan Dwyer after practice on multiple allegations of felony assault. It was the latest public relations blow for the most popular sports league in America, which has been the subject of public scorn and scrutiny after half a dozen players recently got into trouble or were disciplined. In addition to Dwyer, the list of those in trouble includes Adrian Peterson, Greg Hardy, Ray Rice, Ray McDonald and Quincy Enunwa.

Yes or no? Scotland's voters head to the polls today to cast their ballots in the country's landmark independence referendum. There, they will face a straightforward yes/no question: Should Scotland be an independent country? More than 4.2 million people have registered to vote, the largest electorate ever in Scotland, and turnout is expected to be high. A vote for independence would mean Scotland, with its population of about 5.3 million, splits from the rest of the United Kingdom.

Cancer treatment: Toronto Mayor Rob Ford soon will begin chemotherapy to treat a rare and aggressive cancer, a doctor at Mount Sinai Hospital in the city said yesterday. Ford has a malignant liposarcoma, and a second biopsy on his tumor done Monday shows it is aggressive. "However, we are optimistic about this tumor," Dr. Zane Cohen said. Ford, who recently announced he will not run for re-election, will start chemotherapy by Friday afternoon. His term as mayor ends on December 1.

- Take that, NFL: It's time for the Ray Rice Makeup Tutorial. This is the best satire you'll see all week.

- Just getting a bit of air: Like most dogs, Philly the Weimaraner likes to poke his head through the sunroof on a clear day.

- And the winner is: This speedy commuter races a London subway train along the Circle Line from Mansion House to Cannon Street.

- Leaf us alone: These mellow cats are less than impressed with their purple cabbage headgear.

- Grounded: A hummingbird gets gummed up.