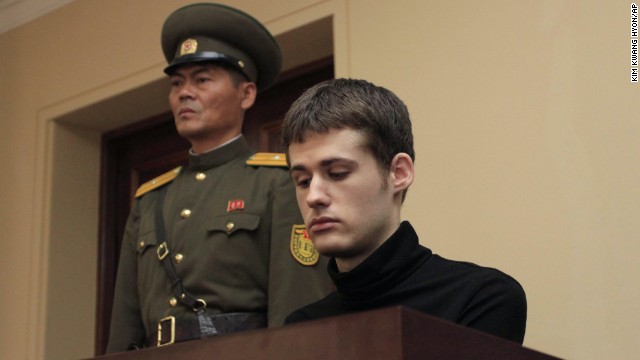 Football fans boycott the NFL over domestic violence, Hillary Clinton fries up steaks in Iowa, and an American is sentenced to hard labor in North Korea.

No football for me today. Fire Goodell and I may return. #BoycottNFL @nflcommish @nfl #FireGoodell

To run or not to run: That was the question put to Hillary Clinton yesterday, while she fried up some steaks in Iowa. The answer? None, really. With Bill Clinton at her side, she told about 200 journalists that they were in Indianola to help Democrats at the annual outdoor fundraiser called the Harkin Steak Fry. Sen. Tom Harkin has held it 37 times. Yesterday was his last. Clinton leads in the polls, but she lost her primary bid in the state in 2008, so some down-home face time in Iowa may have done her some good.

3. TACKLING ISIS
New beheading threat: ISIS says it’ll do it again. Over the weekend, the Islamist extremists posted video of the beheading of a British aid worker. That was a message to America’s allies, they said, and they have another hostage from the UK who could also meet with a barbaric fate. Their threats seem not to deter - but instead to spur - President Obama's military plans. He says he'll expand airstrikes against ISIS into Syria and is asking other nations to help out in the fight. They meet today in Paris to discuss how to go about it.

4. UKRAINE CRISIS
War and peace: There are good signs and not so good ones coming from Ukraine. Pro-Russian rebels released captive Ukrainian troops yesterday as part of a ceasefire deal. But even with the truce, shells fell all day. Today, "Exercise Rapid Trident" kicks off. It will put American boots on the ground in Vladimir Putin's backyard in Ukraine - but in the west, away from the conflict. It's a training exercise, and it's happened before, but not since the start of the Ukraine crisis.

5. AMERICAN IN NORTH KOREA
Hard labor: For months, he was held captive by the North Korean regime, not even sure what he would be charged with. Then in one fell swoop, American citizen Matthew Todd Miller was convicted of committing "acts hostile" to North Korea and sentenced to six years of hard labor. What did he do to deserve that? State media said that when the 24-year-old arrived as a tourist in April, he ripped up his tourist visa and shouted his desire to seek asylum there.

- Big hole in your pocket: Golfer Rory McIlroy teed off for a hole-in-one. But not into the cup. The ball landed in the pants pocket of a fan along the fairway.

- Who's your daddy? It's a guy with a beard, this little girl knows. So, when he shaves it and unveils his smooth skin to her, she throws a fit.
https://www.youtube.com/watch?v=XgMPV3slCis&feature=youtu.be

- The bottom drops out: That must be what it feels like for this 29-year-old man who takes his first flight and is overcome with aerophobic fright.
http://www.youtube.com/watch?v=oS9a75fP6NU&feature=youtu.be

- Dog's best friend: You just can't help but see that animals have feelings, too, when you watch this puppy reunite with his rescuer.
https://www.youtube.com/watch?v=aBCUJz6Zqy4&feature=youtu.be