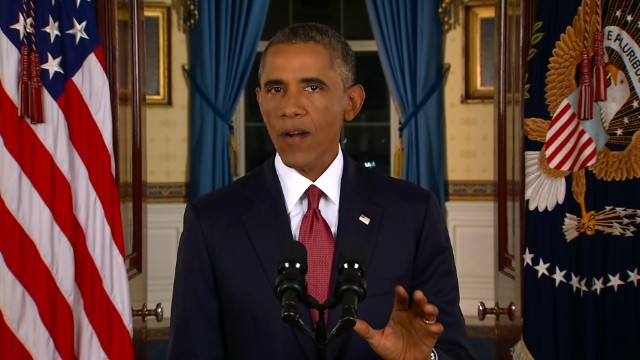 President Obama says it's time to go after ISIS. A former FBI director will investigate the Ray Rice case. And 40 million Americans are saddled with college loans.

"No safe haven": It's time to go after ISIS in both Iraq and Syria, President Barack Obama said last night in a nationally televised address. "Our objective is clear: We will degrade, and ultimately destroy, ISIL through a comprehensive and sustained counterterrorism strategy," he said. U.S. airstrikes have already been hitting the jihadists in Iraq. Those strikes will be expanded to ISIS targets in Syria, Obama said.

Another view: A video obtained by CNN captures the reactions of two men who witnessed the shooting of Michael Brown, the African-American teen killed in Ferguson, Missouri. One of them screams, "He had is f****n hands up," and then he motions with his own arms. The men say Darren Wilson, the officer identified in the shooting, was not the only officer on the scene. There were two others. The men, who asked not to be identified, said a second officer drew his weapon but did not pull the trigger.

13 years ago: On this anniversary of 9/11, folks are a lot more uneasy than they were three years ago. A new CNN/ORC International survey indicates that 53% of Americans believe it's likely for acts of terrorism to take place at this time, up from 39% in 2011 on the 10th anniversary of the attacks. Most Americans, however, don't feel personally threatened by terrorism. Just over four in 10 say it's likely that they or a family member will become a victim of terrorism.

A heavy load: Carrying tens of thousands of dollars in student loan debt has become the new normal. Thanks to climbing tuition and inadequate college savings, 40 million Americans now have at least one outstanding student loan, according to a new analysis from credit bureau Experian. That's up from 29 million consumers in 2008. On average, borrowers are carrying roughly four student loans each, up from less than three in 2008. Meanwhile, the average balance has increased to $29,000 from $23,000. Ouch.

- Is this any way to start a life together? Here's another group of groomsmen pretending to be in a boy band.

- Toilet paper cannon: This is some good clean fun.

- Cat sliding: This is Rigby the cat's favorite game.