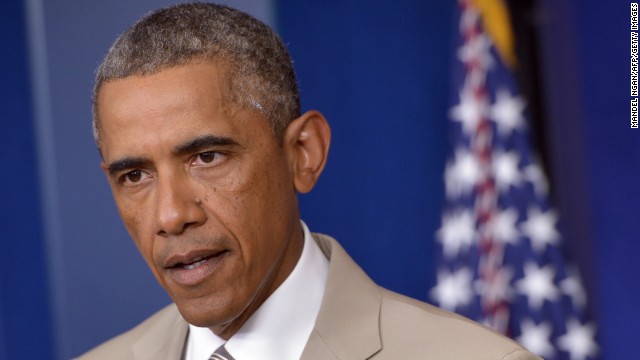 President Obama will speak to the nation tonight about the ISIS threat.
September 10th, 2014
05:25 AM ET

The President rolls out his strategy for combating ISIS. The NFL commissioner is under fire for his handling of the Ray Rice case. And Apple wows the world with four new products.

Prime-time speech: Tonight, President Barack Obama will outline his plan for combating the ISIS terror group. A senior administration official says he'll focus on three major themes: the threat posed by ISIS, his strategy to address that threat and proposals on how to fight and destroy the militant group. We know the White House is trying to build an international coalition to confront ISIS. How it takes shape will probably influence the President's overall plan, something that's said to be a work in progress.

Under fire: Ray Rice is out of a job. An increasing number of critics think National Football League Commissioner Roger Goodell, the man in charge of disciplining the star player, should be next. Critics want to know why he and the league were initially lenient in doling out punishment, first issuing a two-day suspension before suspending Rice indefinitely. "I didn't get it right," said Goodell. "Simply put, we have to do better." The National Organization for Women is calling for his resignation.

Lawsuit: A former exotic dancer has filed a lawsuit against Dallas Cowboys owner Jerry Jones, accusing him of sexual assault. In the suit, Jana Weckerly says that Jones assaulted her in 2009 and that the Dallas Cowboys knew about and covered up the incident. Weckerly is seeking "monetary relief of over $1,000,000," according to the suit. Reaction from the Cowboys was swift. Levi McCathern, an attorney representing the team, called the allegations "completely false" and "a shakedown."

Bodies discovered: Authorities in Mississippi are holding a father of five in the deaths of his children, ages 1 to 8, the state's Department of Public Safety said last night. Timothy Jones Jr., 32, is being held in Smith County on child endangerment charges and is awaiting extradition to South Carolina for prosecution. The children, reported missing from South Carolina last week, were found dead in Alabama on Tuesday, authorities said. Their remains were discovered off a dirt road with the help of Jones.

Core innovations: In one of the most ambitious product launches in its history, Apple unveiled two new iPhones, a smartwatch and a mobile payments platform yesterday. The iPhone 6 and iPhone 6 Plus are bigger, rounder and faster. The Apple Watch does more than any smartwatch on the market today. And Apple hailed the Apple Pay payments system for its security and ease of use. The new iPhones will be able to interact with payment terminals in a simple tap. Apple has deals in place with the major credit card companies, as well as several major retailers.

- One serious club: Karsten Maas enters the Guinness book of World Records with the longest usable golf club. It's more than 14 feet long.

- Leash on life: This young hound scores high on determination, but intelligence is a different story.

- Yikes: This guy really likes helmets. You'll just have to watch to find out why.

- Battle for the ages: Rugby the English bulldog pup versus an ice cube.

- Epic Nerf war: This really gets out of hand, fast.