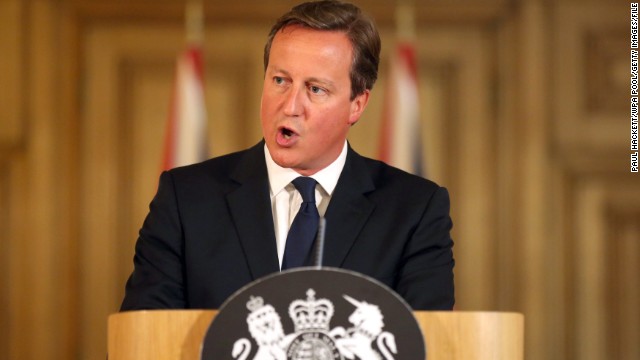 PM David Cameron will introduce new legislation to make it harder for Britons to travel to Syria and Iraq to fight for ISIS.
September 2nd, 2014
03:55 AM ET

Anti-terror operation: U.S. military forces conducted an operation against the Al-Shabaab network in Somalia yesterday, Pentagon press secretary Rear Adm. John Kirby said. No other details were immediately available. Al-Shabaab is an al Qaeda-linked militant group. The U.S. designated it a foreign terrorist organization in 2008. It has targeted Al-Shabaab leaders in Somalia at least twice in the past year.

Travel restrictions: British Prime Minister David Cameron wants Parliament to pass a new law to prevent would-be jihadists from leaving the country. The law would give police the temporary power to seize a passport in case a British citizen is suspected of trying to travel to support ISIS. Cameron also said Britain needs measures to prevent the return of foreign fighters. UK authorities estimate that 500 Britons have gone to Syria and Iraq to fight with Islamist groups.

Grounds for conflict: On the heels of an open-ended ceasefire with Hamas in Gaza, Israel laid claim to 1,000 acres in the West Bank over the weekend - a move that drew criticism from the United Nations and Palestinian leadership. U.N. Secretary-General Ban Ki-moon says the move is "illegal under international law and runs totally counter to the pursuit of a two-state solution." The Palestine Liberation Organization deemed it the largest Israeli "land grab" in three decades. The property would become "state land," making it available for Israeli settlements. Farmers in the area have 45 days to appeal Israel's decision.

Surprise interviews: Three Americans detained in North Korea spoke out about their conditions and pleaded for U.S. help in interviews with CNN. Kenneth Bae, Matthew Todd Miller and Jeffrey Edward Fowle were presented to CNN's Will Ripley at a Pyongyang hotel Monday. Each was given five minutes for an interview, which government officials monitored and recorded. A CNN team was on a government tour about two hours outside the capital, Pyongyang, when it learned it had to leave immediately to meet with a high-level government official. The crew boarded a van to a secret location, where it found out the meeting was with the three Americans.

No silver linings here: A hacker's leak of nude photos of Jennifer Lawrence and other female celebrities is now a case for the FBI. Nude photographs of Lawrence, who won an Academy Award last year for her role in "Silver Linings Playbook," were splashed on various sites Sunday. They appeared on 4chan, Reddit, Twitter and Tumblr, among others. Lawrence's publicist said "authorities have been contacted and will prosecute anyone who posts the stolen photos of Jennifer Lawrence." Kate Upton's lawyer also confirmed photos of the model-actress were among those leaked, calling it "an outrageous violation" of her privacy.

- Rock 'n' roll passing: Survivor lead singer Jimi Jamison, who belted out the hits "The Search is Over" and "Burning Heart," died over the weekend. He was 63.

- Baby on the way: Country music star Carrie Underwood and her NHL husband, Mike Fisher, are expecting their first child. They clued us in via Twitter.

In honor of "Labor" Day...Ace & Penny would like to make an announcement. Their parents couldn't be happier! pic.twitter.com/bROrzuHJ4J

We haven't picked names yet but it's looking like Fly is gonna fly. #boyorgirl #flyfisher

- Teachers get footloose: Two teachers at Union Grove High School in Wisconsin came up with this catchy little video to raise money for school projects.

- Barking up the wrong tree: MonkeyBoo wants a ride. Sam the dog is having none of it.

- Basic training: This dad resorts to social media to teach his teens basic life skills (because they couldn't be ignoring him, right?).