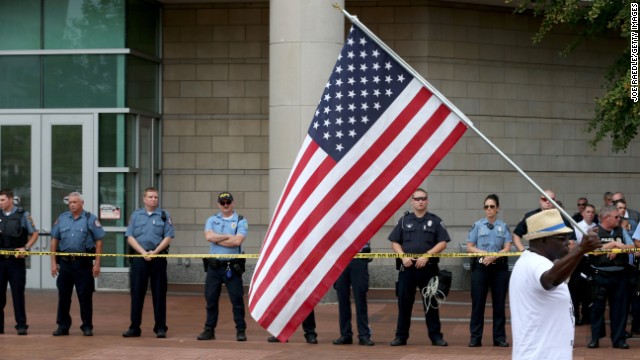 Police stand guard as demonstrators protest at the courthouse where a grand jury will look into Michael Brown's death.
August 21st, 2014
01:32 AM ET

A mission to rescue James Foley before his death fails. Protests in Ferguson abate. And U.S. airlines reap billions in profits.

Failed mission: Earlier this summer, Special Ops units flew into Syria on a mission to rescue American journalist James Foley and others. But when they reached the target location, no one was there. That's the latest revelation about Foley's finals days in the hands of ISIS, which taunted his family in an e-mail a week ago, saying he would be killed. That's what ISIS did, in a gruesome videotaped beheading.

Two months: It looks like it might be that long before a local grand jury decides whether to bring charges in the death of Michael Brown. St. Louis County Prosecuting Attorney Robert McCulloch began presenting the case yesterday. The same day, the crowds were smaller and calmer in Ferguson - a departure from the confrontations between police and protesters the last couple of nights.

MORE: Prosecutor says he's 'not going to rush it'

Not yet: In Virginia, residents voted to ban same-sex marriage. An appeals court struck down that ban last month and said the state should start providing marriage licenses to gay couples. Yesterday, the Supreme Court stepped in and issued an order that effectively said: No, gay and lesbian couples can't legally wed in the state for now.

The #SupremeCourt has made clear it won't be rushed. OK. We must make clear ending #marriage discrim is urgent. Delay hurts. @freedomtomarry

MORE: No same-sex marriage in Virginia for now

As the Ebola outbreak spreads in Africa, here's a look at the updated numbers of cases and deaths: pic.twitter.com/EvfDfpUPNX

Windfall: The top U.S. airlines earned profits of $3.8 billion in the first half of 2014. That's up from $1.6 billion during the same period last year. Think they'll slash fares a bit now? Or maybe give us some better in-flight snacks? We're guessing not.

You hate them but airlines love them and are making billions in profits: http://t.co/d5lwvvbbIF pic.twitter.com/fCw8OTL6ZH

MORE: Airline profits up in first half of 2014

- I believe I can fly: It takes a little coaxing, but when this little French bulldog puppy learns to jump into his owner's arms ... precious!

- This is why YouTube was invented: So that some guy can post a video of a lizard in a tiny cowboy hat riding a tortoise.

- Pool pawty: Digg had a great headline for this video: "Disneyland is no longer the happiest place on Earth"

- Whoa! A sprint car flies into the stands and nearly takes out someone.

- Whoa! Part II: I'm sure tomorrow we'll find out this is part of a viral ad campaign. For now, watch this unbelievable ending to a motorbike accident