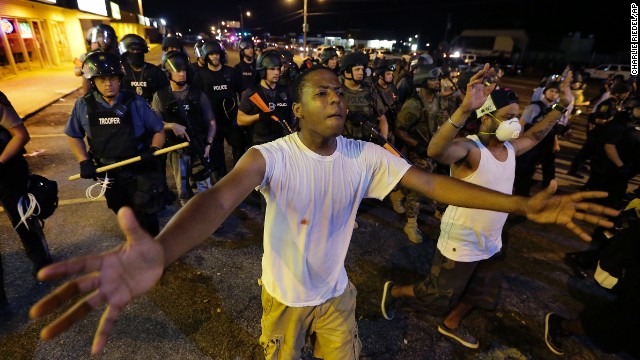 People are moved by a line of police as authorities disperse a protest in Ferguson, Missouri, early Wednesday, August 20.
August 20th, 2014
04:06 AM ET

A horrific end: The video is horrific. The intent behind it, despicable. It shows ISIS militants beheading American journalist James Foley - and threatening to do the same to another journalist if President Barack Obama doesn't end military operations in Iraq. Foley disappeared in November 2012 in northwest Syria while working with GlobalPost. He hadn't been heard from since then. "I wish I had more time. I wish I could have the hope for freedom to see my family once again," he says before he is brutally killed.

#Syria has been the most dangerous country for journalists for more than two years https://t.co/x7aOl0rShK #journosafety #pressfreedom

Not again: There were high hopes that the nightly protests in Ferguson would end peacefully for a change yesterday. That promise held out for most of the evening - until a water bottle flew at police. That's when they charged after protesters. No tear gas was fired and the demonstrators were spared the heavy-handed response of the last few days. Today, a grand jury is expected to get to work to determine whether the officer who killed Michael Brown should be indicted.

Jameila White walked a mile to #Ferguson to hand out free water, and milk to relieve burning from tear gas. pic.twitter.com/6Kwq0rPEGI

Truce falters: The depressing cycle of strikes and counter strikes resumed in Gaza as talks failed between Israelis and Palestinians. The armed wing of Hamas fired 29 rockets in 20 minutes; the Israeli military retaliated with air strikes that killed at least three people, including an infant.

Humanitarian challenge: The U.N. refugee agency begins a massive four-day airlift today into Irbil in northern Iraq. It's one of the largest humanitarian aid push the agency has ever undertaken. And it's much needed. Half a million refugees have been displaced as ISIS militants have advanced.

Ready to rumble: Texas governor and potential 2016 presidential candidate, Rick Perry, had his fingerprints and mugshot taken yesterday, and said he's going to fight the charges against him "with every fiber of my being."

The charges allege the Republican governor misused his office by improperly threatening to and then withholding state funds for a program run by a Democratic county prosecutor unless she resigned. Then he got ice cream.

And then, ice cream cone at #Sandy's pic.twitter.com/rDYW6HvoS5

- Do-over! Do-over!: Remember the guy who took your money for a better potato salad? He took the ice bucket challenge, but did it his way. We're saying that doesn't count!

- Big courch, small car: Add someone who's really bad at physics, and you get this.

- When koala bears argue: It's adorable. Like seriously, adorable.

- The many uses for a watermelon: Yesterday, we brought you a cat using a watermelon as a pillow. Today? Cat helmet!
[youtube=http://youtu.be/QuchgvOR_R4]