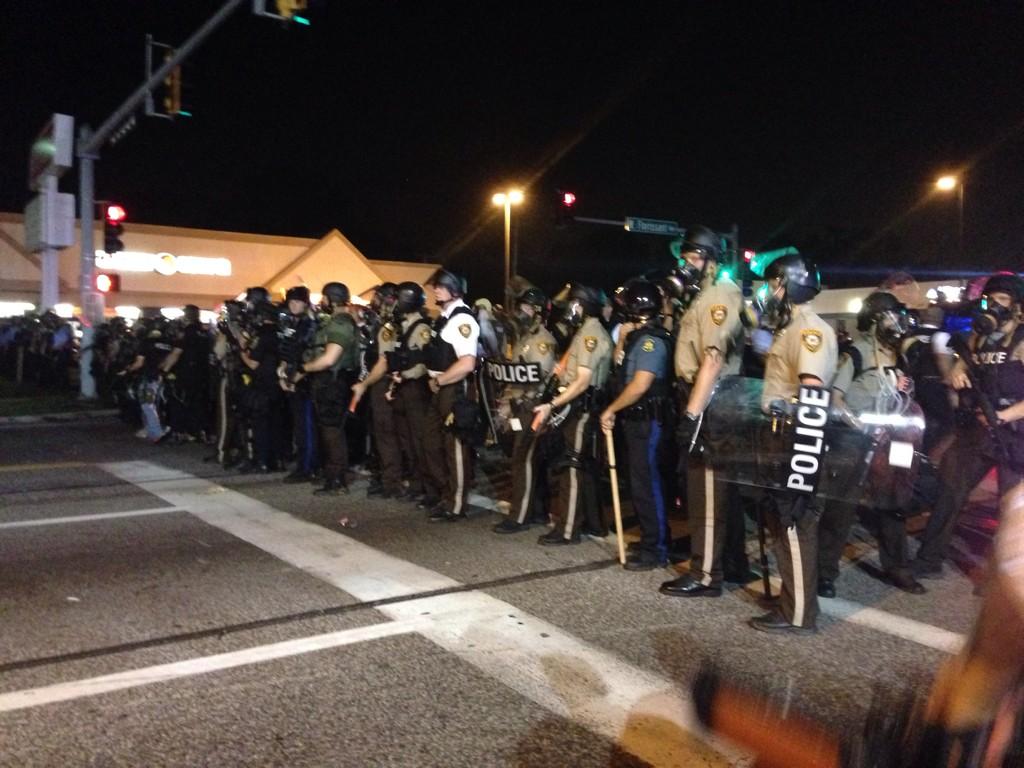 Ferguson erupts in clashes again. The crucial Mosul Dam is retaken from militants. And Rick Perry's legal team braces for a fight.

The actions of a few: An evening of peaceful protests devolved into another tense confrontation in Ferguson, Missouri, last night as a few protesters hurled bottles and rocks, and in some cases Molotov cocktails, at a heavy police presence. The officers, armed to the teeth, responded by firing stun grenades and tear gas canisters. "At the end of this, we're gonna be classed as insurgents," an upset protester told CNN about the police response.

DO NOT ENTER sign pointed right at the police #ferguson pic.twitter.com/YRprpVaL6E

An uneasy truce: Israeli and Palestinian negotiators have agreed to extend the current Gaza cease-fire by 24 hours. This means the two sides have until midnight today (5 p.m. ET) to come to an agreement over the thorny issues that have made lasting peace in Gaza so difficult.

There's not much left of #Gaza zoo. Animals that survived are starving. http://t.co/YHDIkcAAOg via @fpleitgenCNN pic.twitter.com/OrToJHJIxQ

A critical capture: U.S. airstrikes helped Kurdish and Iraqi forces take control of Mosul Dam from ISIS militants. The stakes were huge for the millions of Iraqis who live downstream from the dam, the largest in the country. "If that dam was breached, it could have proven catastrophic, with floods that would have threatened the lives of thousands of civilians and endangered our embassy compound in Baghdad," President Barack Obama said.

Neutralized: Lost in the onslaught of news yesterday was something that is quite significant: Syria's most dangerous chemical weapons have been destroyed at sea. A U.S. government container ship, the Cape Ray, spent the last 45 days in international waters destroying 600 metric tons of them.

Outrageous! That's what Texas Gov. Rick Perry's newly unveiled legal team called last week's grand jury indictment of the potential 2016 GOP presidential contender. It said the indictment has "no merit" and constitutes an "outrageous assault on the rule of law" that is certain to be rejected in the courts. Perry was indicted on two felony counts stemming from his threat to veto funding for a statewide public integrity unit unless the Democrat who ran it stepped down, officials said.

Rick Perry's indictment might hurt his chances in 2016. Or as Hillary put it,"One down, four more to go." #fallonmono

- A new tagline: Watermelon: It's not just for eating anymore.

- Give it back: This boy's traumatized when Dad steals his ear and nose.

- Quick, hit snooze! This is kind of like how I feel when woken up before the alarm.

- Slow and steady ... OK, who thought it would be funny to have a turtle chase a truck on a hardwood floor? Mean.