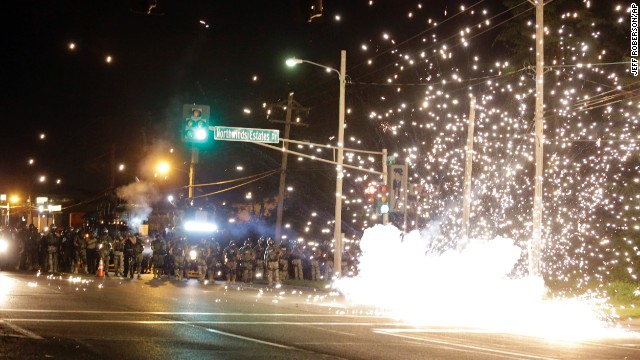 Police clash with protesters in Ferguson, Missouri, after the weekend death of an unarmed teenager.
August 14th, 2014
02:13 AM ET

Eyewitness account: A new witness in the police shooting death of Michael Brown told CNN that Brown and the police officer tussled with each other before the officer shot the teen multiple times as Brown backed away. Police in Ferguson, Missouri, have said Brown died in a dangerous struggle after trying to grab the officer's weapon, but witnesses say that it seemed a brazen act of aggression by the officer Saturday and that Brown was unarmed and not threatening. Protests have erupted each night since the shooting. Missouri's governor will visit the community near St. Louis today.

Humanitarian crisis: A mass evacuation of Yazidis in northern Iraq seems unlikely now that the U.S. has evaluated the situation. Last week, the minority group was chased from the town of Sinjar by ISIS, which calls itself the "Islamic State" and was known as the Islamic State in Iraq and Syria. Once believed to be in the tens of thousands, the number of Yazidis in Iraq's Sinjar Mountains is "now in the low thousands," the State Department said. Still, the United Nations has announced its highest level of emergency for the humanitarian crisis, saying the 400,000 people on the run from ISIS are of grave concern.

Cease-fire extended: Israel has accepted an Egyptian proposal to extend the current cease-fire five more days, an Israeli government spokesman said today. Earlier, Palestinian officials said they had agreed to extend the truce. Israeli and Palestinian delegations have been talking in Cairo, using Egyptian go-betweens, in hopes of ending hostilities that have killed more than 2,000 people. But there's still lots to work out. Israel says it wants Gaza demilitarized. The Palestinian delegation is demanding an end to Israel's economic blockade on Gaza and the release of prisoners held by Israelis.

Intriguing case: An American woman and her boyfriend have been named suspects in the death of her mother after her body was found stuffed in a suitcase, police in Indonesia said. Sheila von Weise Mack had been staying at the posh St. Regis Bali Resort with her daughter, Heather Mack, and the daughter's boyfriend, Tommy Schaefer. The couple say they were taken captive by an armed gang that killed Sheila von Weise Mack. They say they managed to escape. As suspects, police can hold them up to 20 days while they investigate.

Rough waters: SeaWorld isn't having a good time these days. Shares of the theme park operator plunged nearly 33% Wednesday after it reported weak earnings and lackluster attendance for the year, especially at its flagship destination theme parks in San Diego and Orlando. SeaWorld Entertainment said it expects revenue to drop 6% to 7% for the year. That's a lot worse than Wall Street expected. SeaWorld has come under fire after the airing of "Blackfish" last year, a CNN documentary that exposed the alleged dangers of keeping orcas in captivity.

- Make it come back: Oh, the joys of technology. This little girl is heartbroken after deleting a picture of her uncle.

- Disconnection hell: This guy says his cable provider put him on hold for more than three hours when he tried to cut service.

- Say goodbye to Hollywood: With the passing of Lauren Bacall this week, all 16 of the Hollywood icons named in Madonna's hit song "Vogue" have died.