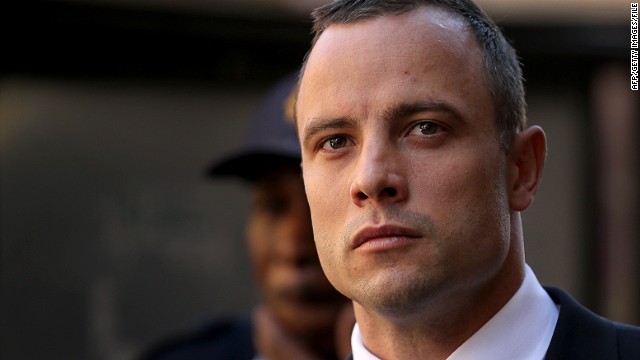 Two days of closing arguments have begun in the murder trial of Oscar Pistorius.
August 7th, 2014
03:32 AM ET

The clock is ticking on the Gaza cease-fire. Fear grows over the Ebola crisis. And closing arguments begin in the Oscar Pistorius murder trial.

What's next?: So far, there's no peace deal in Cairo, but there's no fighting in Gaza, either. Entering the third day of a 72-hour cease-fire, officials from Israel and the Palestinian side - including Hamas, Islamic Jihad and the Palestine Liberation Organization - gathered in Egypt for talks about how to make the truce last. Will they strike a peace agreement? Will the truce be extended? Stay tuned.

Fears grow: The Centers for Disease Control has raised its Ebola response to the highest level out of a growing fear the deadly virus may reach the United States. The World Health Organization announced yesterday that 932 deaths had been reported or confirmed as a result of Ebola hemorrhagic fever. Nearly all of those deaths have been in Liberia, Sierra Leone and Guinea, where more than 1,700 cases have been reported.

Surf's up: You'll have to pardon the people of Hawaii if they are freaking out over an approaching hurricane. It's the kind of thing that rarely happens around there. And there are two headed their way. There's Hurricane Iselle, which looks like it will smack into the Big Island tonight, and the less threatening Hurricane Julio over the weekend. The surfers are loving it. Everyone else, not so much.

Closing arguments: Prosecutors are making their final case today for a conviction in the murder trial of Oscar Pistorius. He is accused of murdering his girlfriend Reeva Steenkamp, 29, on February 14, 2013. The Olympic sprinter admits to firing the bullets that killed Steenkamp, but denies murder, saying he mistakenly thought he was defending himself from an intruder. The defense will present their closing arguments tomorrow. A judge will rule on the case.

Brutal regime: Former Khmer Rouge leaders Nuon Chea and Khieu Samphan have been found guilty of crimes against humanity. Both were sentenced to life in prison. The men were senior members in the regime that ruled Cambodia between 1975 and 1979. During that time at least 1.7 million people - about a quarter of the Cambodian population - are believed to have died from forced labor, starvation or execution.

- Got your goat: It's about a month late for the World Cup, but our four-legged friend sure has a head for the ball.

- Jeremy Lin dunk cam: Have you recorded and posted your dunk cam video yet? They're being judged on "creativity, execution and post-dunk celebration," or so says the new L.A. Laker, who has recorded a few dunk cam videos of his own. Don't forget the hashtag #JLinDunkCam so the judges can find it.

Day 3 of Fan Appreciation Week! Who can come up with the best #JLinDunkCam video?!? All submissions will be judged on creativity, execution and post-dunk celebration lol. You MUST use #JLinDunkCam so we can find the video and post by midnight pst today. PLEASE be safe! My video will give you guys a few ideas (no need to use a real mini-bball/hoop...all props work too) #JLinDunkCam #sorrymom #takenoprisoners

- Rescue down under: A volunteer rescue team frees a man stuck at a subway stop in Perth, Australia.

- The fire challenge: This spoof points out the stupidity of the craze that has been sweeping social media.