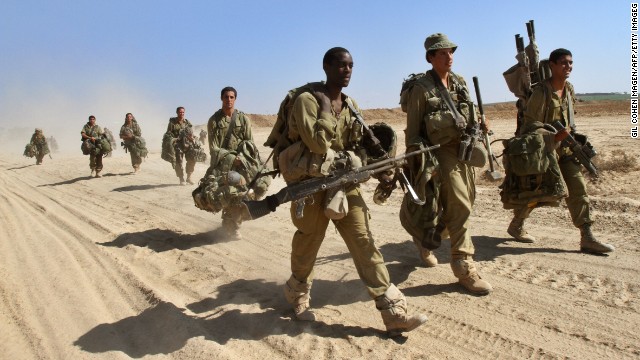 Israeli soldiers walk back across the border from Gaza. A new cease-fire began today.
August 5th, 2014
02:50 AM ET

A three-day cease-fire begins between Israel and Hamas. Another American with Ebola is being brought back to the United States. And a nationwide fruit recall expands.

Truce: The Israeli military withdrew its ground troops from Gaza this morning as a 72-hour humanitarian cease-fire with Hamas began. The move wasn't a total surprise since IDF said it was wrapping its work of destroying some 32 militant tunnels that run under the border. The tunnels have been used for attacks on Israel. Just before the truce began, a barrage of rockets from Gaza went up, Israel said. More than 1,900 people have died in the fighting, the vast majority are Palestinians.

Life flight: A second American suffering from Ebola is expected to arrive in Atlanta today from Liberia, where she contracted the often-deadly virus. Her plane departed early Tuesday morning, a source told CNN. Missionary Nancy Writebol is traveling aboard an air ambulance equipped with an isolation unit. It will land at Dobbins Air Reserve Base, and from there she'll be rushed to Atlanta's Emory University Hospital about 20 miles away.

The battle for Iraq: Kurdish forces in northern Iraq remain in control of the nation's largest hydroelectric dam after fending off an assault by the radical Islamic State, the dam's director said. Earlier reports said fighters with the Islamic State, formerly the Islamic State in Iraq and Syria, or ISIS, had overrun the facility. They were pushed back after gaining access to a housing compound for employees who work at the dam just north of Iraq's second largest city of Mosul, Abdul Khaliq al-Dabbagh, the director of the Mosul Dam, said.

Another case: The parents of a newborn, who died after being left in a hot car in North Carolina last month, have been charged with the child's death. Sherrie Tiesha Clay and Shakee Duquan Robinson were arrested yesterday on charges of involuntary manslaughter and felony child abuse, according to Statesville police. Both parents are being held in the Iredell County Jail on $200,000 bond.

Intestinal mischief: If you've bought California nectarines, peaches, plums or pluots lately, even the organic kind, check the label carefully. The Wawona Packing Co. in Cutler, California, has expanded a voluntary recall of its products. The fruit may be contaminated with Listeria monocytogenes, a bacterium that can cause listeriosis. The symptoms associated with this serious infection included high fever, abdominal pain and diarrhea, headaches, stiffness and nausea.

–The Jordan and Taylor show: Taylor Swift surprises Jordan, a young fan suffering from leukemia at Boston Children’s Hospital. Jordan is thrilled and sings along to "We Are Never Ever Getting Back Together."

- Real food debut: Baby gets his first taste of anything other than breast milk.
https://www.youtube.com/watch?v=lG8z544bzBQ

- The cows come home: Farmer Derek Klingenberg serenades his cattle with a trombone version of Lorde’s "Royal" - and they come running.

- Bird brain: Toucan Sam makes a nuisance of himself in front of a traffic camera in Brazil.
https://www.youtube.com/watch?v=ZGXzA8J8CTE&feature=youtu.be

- Surprise: A lion cub sneaks up on an unsuspecting dog at the Cornellskop Animal Training Farm in South Africa.