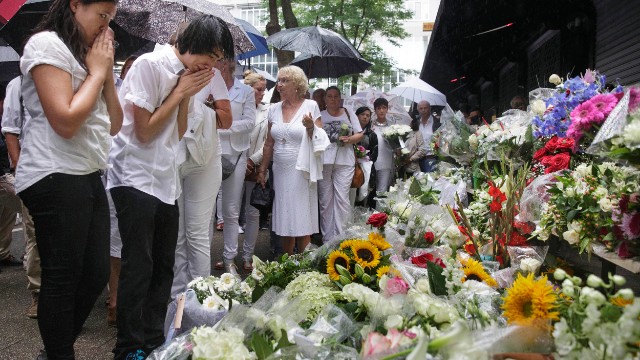 Flowers in the Netherlands commemorate the victims of the Malaysia Airlines Flight 17 crash.
July 23rd, 2014
12:16 AM ET

The first bodies from the downed Malaysia Airlines plane are due to arrive in the Netherlands. The FAA warns airlines to avoid Israel. And Obamacare wins one and loses one in the courts.

Remembering the victims: Today is a national day of mourning in the Netherlands for the victims of Malaysia Airlines Flight 17. The first bodies were on their way from the Ukraine to the Netherlands, where the jetliner originated.
Did a Russian fire the missile that brought down MH17? That depends on who you ask. A top Ukrainian official says he has no doubt. U.S. officials say pro-Russian rebels were responsible for shooting down Flight 17, but they now say they believe it's likely the rebels didn't know the plane was a commercial airliner when they opened fire, U.S. intelligence officials said yesterday.

Close call: A number of the world's leading airlines have suspended flights to Israel's main airport after a rocket fired from Gaza struck about a mile from its runways. The Federal Aviation Administration ordered U.S. airlines to stop flying to or from Tel Aviv's Ben Gurion International Airport for at least 24 hours, and the European Aviation Safety Agency issued a warning to its airlines to stop its flights.

Mixed bag: Two appeals courts made opposite rulings on Obamacare yesterday. First, a three-judge panel of the D.C. Circuit Court of Appeals ruled against a key component of the law - the federal subsidies for millions of people who signed up for health coverage. The 2-1 decision created a legal path for a possible Supreme Court case that could essentially gut the 2010 Affordable Care Act, which passed with zero GOP votes. A few hours later, all three judges on a 4th Circuit panel in Virginia decided the opposite by declaring the subsidies legal and proper. The attorneys are earning their money on these cases.

Not all peaches and cream: Listen up if you've picked up fruit at Costco, Trader Joe's, Kroger, Walmart or Sam's Club recently. Peaches, nectarines, plums and pluots that were packed at Wawona Packing Co. warehouses in Cutler, California, between June 1 and July 12 are being recalled. Wawona believes the products may be contaminated with Listeria monocytogenes, which can cause listeriosis. The most common symptoms are gastrointestinal issues (like diarrhea), fever and muscle aches.

Washington standoff: Prospects for passage of a plan to address the southern border crisis before Congress leaves for its summer recess were in doubt yesterday as Republican congressional leaders blasted President Barack Obama for not engaging them and the top Senate Democrat dismissed GOP proposals as “crazy.” Both the House and Senate are working on packages that aren't likely to make headway on the other side of Capitol Hill.

- Beatle tree: George Harrison's memorial tree at Griffith Park in Los Angeles is killed by beetles.
More on this story.

- Hits the ground running: This baby black rhino already seems to have no problem getting around his exhibit at the San Diego Zoo. There are only about 5,000 members of this critically endangered species left in the wild.

- Nothing but net: Bring a change of underwear for this amusement park attraction in Denmark. You free fall 100 feet at 55 mph into the net below.

- Burning problem: It was supposed to be a simple demonstration on how to put out a burning car, but firefighters at the Somerset Steam and Country Show in England got more than they bargained for.