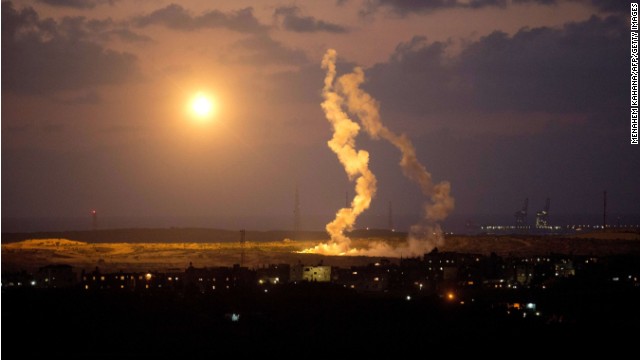 Israel accepts cease-fire with Hamas. The time's ticking for Congress to compromise on immigration. And Tracy Morgan leaves the hospital.

Egyptian initiative: Israel's Cabinet today accepted a cease-fire with Hamas - a development that could provide a possible breakthrough in the ongoing crisis. The Egyptian proposal calls for all sides to cease hostilities in Gaza. The military wing of Hamas said it rejects the offer and its battle with "the enemy" will "increase in ferocity and intensity."

Checking court records: A CNN investigation finds that dozens of employees at Central Florida theme parks - 35 at Disney, five at Universal Studios and two at SeaWorld - have been arrested since 2006 and accused of sex crimes involving children, trying to meet a minor for sex, or for possession of child pornography. So far, a total of 32 have been convicted, with the remaining cases pending. None of the cases involved children or teenagers visiting the parks.

Looking for common ground: A Congress that has trouble agreeing on the color of the sky has scheduled 12 work days to forge a compromise on one of the most volatile issues it will face - immigration. The White House wants $3.7 billion. Republicans want the borders secured. And Democrats want additional resources to speed up the processing of those who are already here. Congress has some motivation to complete the job quickly. Vacation is scheduled to start in a couple of weeks.

Profit over health: The Drug Enforcement Agency has launched an investigation into claims that NFL players illegally have been given powerful painkillers, among other prescription drugs, to keep them on the field, according to a source with knowledge of the investigation. The DEA is looking into records pertaining to the distribution of prescription drugs handed out to players by trainers and doctors, the source added. A lawsuit filed last year by 1,300 former NFL players accuses the league of creating and maintaining a "culture of drug misuse."

Back home: Comedian Tracy Morgan is back at his New Jersey home after an accident last month that nearly took his life. He spent two weeks in critical condition and three weeks at a rehab center before being released. Morgan is suing Walmart after one of its tractor-trailers rear-ended his limo van. The driver is accused of going more than 24 hours without sleep.

- Helpful pachyderm: A tourist drops his video camera during an elephant ride. His faithful steed lends a trunk and returns it safe and sound.

- Power trio: These middle school rockers have just unlocked a major record deal. The New York Daily News says Brooklyn band Unlocking the Truth - two 13-year-olds and a 12-year-old - has signed to work with Sony Music. What were you doing in middle school?

- RE2PECT: Future Hall of Famer Derek Jeter is on his farewell tour after 20 years in Major League Baseball. This tribute is a tip of the hat to a beloved player.
http://www.youtube.com/watch?v=X03_bNuihLU#t=29

- Floppy lips and ears: Do dogs love anything better than a ride in the car? We don't think so.