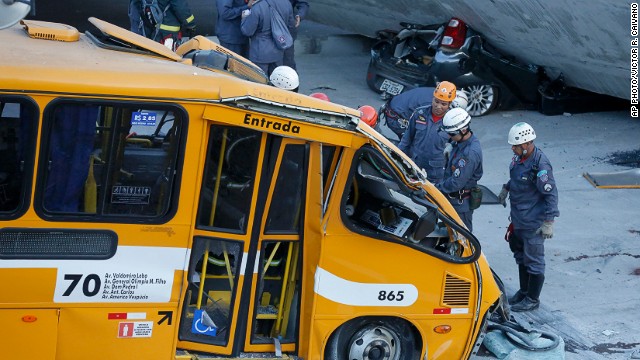 Hurricane Arthur rips along the North Carolina coast. The Pentagon grounds its F-35 fleet. And a Brazilian overpass collapse kills one.

Sand blast: Hurricane Arthur roared along the North Carolina coast overnight, whipping everything in sight with its 100 mph winds. Thousands lost their electricity, according to Duke Power. The Category 2 storm is racing to the northeast and will be near Boston tonight.

Surprising claims: An unfaithful husband who wanted a child-free life is how Georgia prosecutors are portraying Justin Ross Harris. He's accused of leaving his toddler son Cooper strapped into a car seat under a baking sun while he went to work. At a hearing yesterday, a detective said Harris messaged six women, sending and receiving explicit text messages while his 22-month-old was dying.

Mission creep: Will the United States step up its military involvement in Iraq if Islamic militants continue to advance? Gen. Martin Dempsey, the chairman of the U.S. Joint Chiefs of Staff, left the door opened to it. "We may get to that point ... if (the Islamic State in Iraq and Syria) becomes such a threat to the homeland that the President of the United States, with our advice, decides that we have to take direct action ... (but) we are not there yet." Stay tuned.

Wings clipped: The Pentagon grounded its F-35 fleet after a recent runway fire at Eglin Air Force Base in Florida. U.S. military brass didn't provide any details on exactly what happened. Last year, the Pentagon also grounded the fighter jet because of a crack in an engine component that was discovered during a routine inspection in California.

Looking for answers: At least one person was killed when an overpass bridge under construction collapsed in Belo Horizonte, Brazil, one of the host cities for the ongoing World Cup. Two buses were damaged in the collapse and at least one car. Belo Horizonte will host Tuesday's semifinal game between the winner of the France-Germany match and the winner of the Brazil-Colombia game. Both are being held today.

- Pig talk: Bob Bergen gives a crash course on how to mimic Porky Pig. It makes a great party trick.

- Tap that guitar: Check out the percussive guitar work of Sam Meador.

- Nerd nirvana: If you're a fan of the 1980s video game Tetris, you're going to love this. Even if you're not a fan, it should bring a smile to your face.

- Independence Day: And what would the Fourth of July be without the Boston Pops? Just not the same, we'd say. Here's the "1812 Overture."