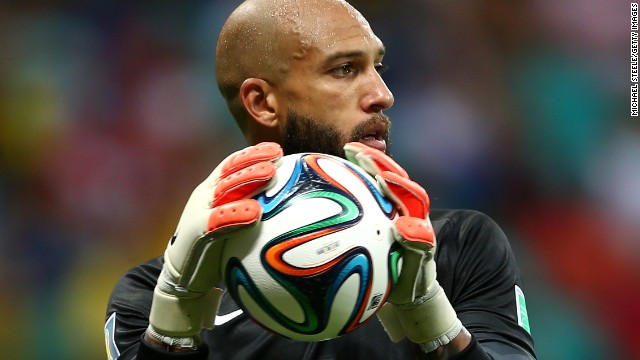 A new American sports hero is born. The feds sue T-Mobile for possible bogus charges. And Israeli police are investigating what may be a revenge killing.

Futbol hero: Team USA is out, but Tim Howard is in. Social media exploded in admiration of the American goalkeeper who made a World Cup-record 16 saves in a 2-1 loss to Belgium that bounced Team USA from the tourney.

Investing contradiction: Hobby Lobby's retirement plan may not be in line with the company's policy to operate "in a manner consistent with Biblical principles," government filings show. In a Supreme Court case, the retailer challenged and overturned an Obamacare mandate that would have required it to provide birth control in employee health plans, something that runs against its religious beliefs. But in this oopsie moment, a check of its 401(k) plan shows investments are being made in companies that make many of those same drugs.

Call your lawyer: The Federal Trade Commission is suing T-Mobile. It says the cell phone carrier made hundreds of millions of dollars in bogus charges that were allegedly concealed on customers' monthly bills. T-Mobile CEO John Legere calls the lawsuit "sensationalized," "unfounded and without merit," and he suggests the government go collect the money from the nefarious text subscription services that bill through this company. So there.

Revenge killing? Israeli police found a body in a wooded area of Jerusalem today. They're investigating whether the death might be an act of retaliation for the killing of three Israeli teenagers whose bodies were found this week. The Israeli government blames Hamas, a militant Palestinian Islamic organization, for their deaths.

In no rush: Even with Islamic militants knocking on the door, Iraq's new parliament is in no hurry to form a new government. In the midst of the turmoil, it postponed its first session after it couldn't reach a quorum. Iraqi lawmakers have a bad track record on such matters. The last time parliament met to pick a prime minister, it took nearly 10 months.

- Not kidding around: Backyard fun with a pug and goat. Need we say more?

- Symbol of the future: They call it emojli - the first emoji-only social network. "No words. No spam. Just emoji." We're catch a strong whiff of satire here. Go ahead and sign up, but bring your own emoji with you. That's your username.

- Crazy crustacean: Why so blue, Mr. Lobster? This rare beauty was caught off the coast of Prince Edward Island on Monday. Folks that study such things say only one in about 2 million lobsters are blue.

- Athlete's tongue: Eddie's a Vedder drinker than you are. The Pearl Jam frontman sips wine from a high-top sneaker at a Stockholm concert. Why? We have no idea.

- Lock your doors: We're not sure who or what TGFbro is, but this is a pretty good prank on why you should lock your doors when you're out driving.
http://www.youtube.com/watch?v=Y-oYwYWFTjQ&feature=youtu.be