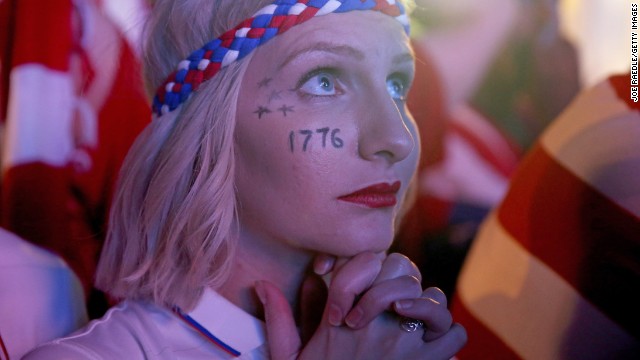 Team USA looks to advance at the World Cup. Israel pounds Hamas after three teens are found dead. And the U.S. sends 300 more troops to Iraq.

It's Tuesday and here are the "5 things to know for your New Day."

He's baaaaaaack: All of us saw Jozy Altidore pull up lame during Team USA's opening World Cup match with a hamstring injury. Now coach Jurgen Klinsmann says the American striker is ready for action in today's round-of-16 match against Belgium. No word on how much he might play. This is win-or-go-home time in Brazil.

Divided court: The split 5-4 ruling by the U.S. Supreme court says some for-profit corporations have religious rights and cannot be required to pay for specific types of contraceptives for their employees. Conestoga Wood Specialties and Hobby Lobby - both largely owned by single families - successfully argued that Obamacare violates their First Amendment right of religious freedom because it requires them to provide coverage for contraceptives like the "morning-after pill," which they see as akin to abortion.

Going it alone: There's lots of finger pointing going on in Washington as President Obama says he'll come up with his own immigration plan, if the House won't vote on one. The White House has some authority to make changes without congressional input. The GOP-led House has balked at a bipartisan Senate bill, because it includes a pathway to legal status for immigrants living illegally in the United States. The President says he'll come up with something by the end of the summer.

American forces: Islamic militants pose enough of a threat in Iraq that the United States is beefing up security at key facilities around the capital. An additional 300 troops will stand guard at the U.S. Embassy, the Baghdad airport and other facilities in Iraq, a Pentagon spokesman said. It brings the total of American forces in Iraq to about 800 troops.

- Juggling job: GoPro catches a Rio street performer plying his craft. Try not to get dizzy in this POV video.

- A sort of a homecoming: A son surprises his mum by pretending to swim from Australia to Ireland. Grab a hanky or two as she dashes to the beach to meet him.

- Pachyderm predicament: Some things you just have to figure out for yourself. A baby elephant takes five minutes to get down from a log it's perched on. You get to see the triumphant final seconds when our little friend conquers its fears.

- Ver what? Check out the latest in crazy water rides at Schlitterbahn Kansas City. This double-humped monster is called Verrückt. It won the Guinness World Record for the tallest water slide at a little over than 168 feet, or 17 stories high. It's just about ready for riders after extensive test runs.
http://www.youtube.com/watch?v=7W7YPDU6nrg&feature=youtu.be