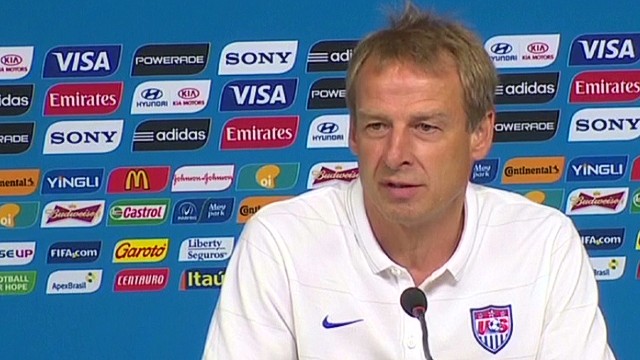 U.S. coach Jurgen Klinsmann played soccer under the German flag. His former team takes on the U.S. in the World Cup today.
June 26th, 2014
02:40 AM ET

#Letsdothis! The U.S. soccer team takes on Germany today at noon ET in the World Cup. This is a game with plenty of intriguing story lines: David against Goliath. Master against apprentice. Determination against precision. The U.S. soccer team absolutely cannot afford to lose this "massive" game, as U.S. coach Jurgen Klinsmann describes it. And to prove his point, he has a note for your boss if you need the day off.

Need note to get out of work Thurs? @J_Klinsmann has you covered. Show your cool boss. It will def work! #LetsDoThis pic.twitter.com/i2oCZmGAGZ

Blurred borders: Syrian warplanes attacked Iraqi towns this week, reports say, further evidence of the blurred borders between the two countries as they battle Islamic extremists. The reports are a reminder that the unrest in both nations could trigger dangerous ripple effects.

Tragic accident or horrific crime? Depends on whom you ask. Justin Ross Harris, whose toddler died after he left him in a car on a scorching Georgia day, has pleaded not guilty to felony murder and child cruelty charges. He is scheduled to appear before a county judge on July 3.  Police say it's a crime, but his supporters say not so fast.  Some have started an online petition asking for his charges to be dropped.

Struck down: In a significant first, a U.S. appeals court in Utah struck down a state ban on same-sex marriage, creating greater political and legal momentum for the Supreme Court to decide whether gays and lesbians have a constitutional right to wed.

Search moves south: The underwater search for Malaysia Airlines Flight 370 is moving farther south in the southern Indian Ocean, Australian Deputy Prime Minister Warren Truss said today. He described the next phase of the hunt for the missing plane as a "very challenging and complex operation."

Dance, birdie: This owl can move better than some of us. We just wish the music was more upbeat.

With this dance, I thee wed: These groomsmen sure can move! And any man who surprises his newlywed wife with a choreographed dance deserves Husband of the Year!

Doggone cute: Pugs dressed as "Game of Thrones" characters. What's not to love?

Remake of a classic: Remember the "Charlie bit my finger” video that went viral? Well, there's a remake featuring soccer bad boy Luis Suarez. Words cannot do justice to the hilarity of this video ...

Red, white and blue baby! Speaking of the World Cup, let's get fired up!