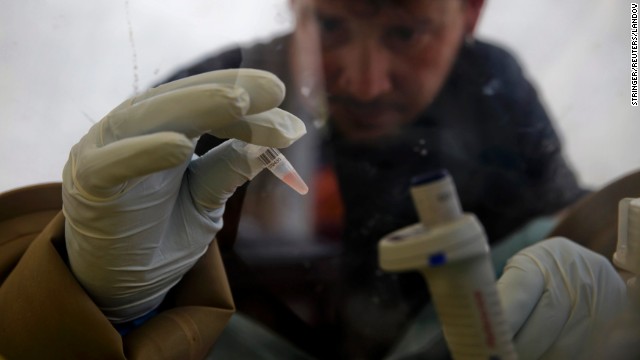 A scientist separates blood cells from plasma cells to isolate any Ebola RNA in order to test for the virus.
June 24th, 2014
05:42 AM ET

Five Things to Know for Your New Day – Tuesday, June 24

A VA hospital worker says dead veterans' files were doctored to make the hospital's stats look better. Secretary of State John Kerry visits Kurdish leaders as Iraqi forces and militants duke it out for the country's biggest oil refinery. And it's primary day for seven states across the U.S.

Stunning allegations: Records of dead veterans were changed or physically altered, some even in recent weeks, to hide how many people died while waiting for care at the Phoenix VA hospital, a whistle-blower told CNN. "Deceased" notes on files were removed so veterans would not be counted as having died while waiting for care, Pauline DeWenter said. DeWenter should know - she is the actual scheduling clerk at the Phoenix VA.

Fueling the fire: Apparently it's not enough to capture towns across Iraq. Power-hungry militants are battling Iraqi forces for control of the country's biggest oil refinery. Who's winning? Depends on who you ask. Meanwhile, U.S. Secretary of State John Kerry is meeting with the Kurdish President, who says we're facing "a new Iraq."

"Out of control": The deadly Ebola virus outbreak in West Africa has hit "unprecedented" proportions, relief workers on the ground said. Officials say there have been 567 cases and 350 deaths since the epidemic began in March. And as if the symptoms aren't scary enough, it's possible for travelers to carry the virus for weeks without realizing they have it.

Let the battles begin: It's judgment day for two of the longest-serving members of Congress, both of whom are fighting for their political lives. Republican Sen. Thad Cochran of Mississippi and Democratic Rep. Charlie Rangel of New York - who have each served more than four decades on Capitol Hill - are in the marquee match-ups Tuesday as seven states from the East Coast to the Mountain West hold primaries.

Locked up: Activists and journalists around the world are outraged after three Al Jazeera English journalists in Egypt were convicted of aiding the Muslim Brotherhood. Peter Greste, Mohamed Fahmy and Baher Mohamed have denied the charges, which included spreading false news and endangering national security. But each was sentenced to at least seven years behind bars.

GOOAAAAAL! Even if you're not into soccer, watching Mexico games just for manager Miguel Herrera's reactions is totally worth it:

North Korea isn't laughing: Apparently, it's not cool to make a satirical movie about assassinating Kim Jong Un, at least not according to a North Korean official. The Telegraph reports that Kim Myong-chol, the executive director of The Centre for North Korea-US Peace, slammed the movie "The Interview," in which James Franco and Seth Rogen play guys who are on a mission to kill Kim. He even gives President Barack Obama a warning.

The nightmare is over: After 10 years, our favorite temperamental chef is leaving "Kitchen Nightmares." Gordon Ramsay bids farewell on his website and waxes nostalgic about meeting "some of the most weird and wonderful people."

Cat talks with bird - and presumably tells it how delicious it looks: