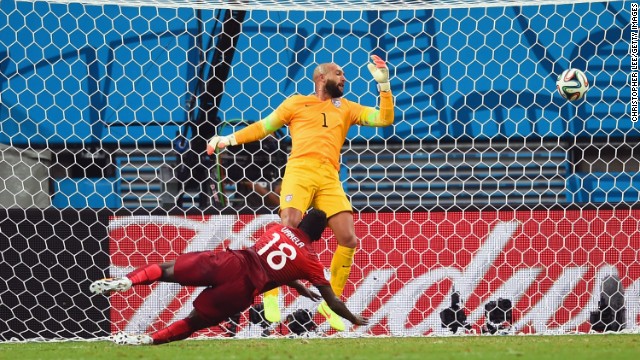 This time it was the United States that gave up the dramatic goal.

Portugal's Silvestre Varela scored on a strong headed goal deep, deep in stoppage time to give Portugal a desperate 2-2 draw with the United States in a key Group G World Cup match at Manaus, Brazil.

The goal, in the 95th minute, came off a cross from Cristiano Ronaldo, who showed no signs of a knee injury that was the subject of much media attention in the buildup to the contest.

Second half strikes by U.S. midfielder Jermaine Jones and striker Clint Dempsey had given the United States a 2-1 lead until Portugal rescued its World Cup chances.

"You're disappointed not to get three points but at the same time you have to take the positives from the game," Dempsey said. "We're happy with four points and there's everything to play for in the last game."

The United States plays co-group leader Germany on Thursday while Ghana and Portugal square off.

The Americans will win the group with a victory, but could also advance to the Round of 16 with a draw and a tie in the other match, which will be played at the same time.

But if Ghana or Portugal wins and the other match also has a winner, tiebreakers - the first being goal differential - will determine the second-place team in the group.

See more on CNN.com and watch "New Day" starting at 6am ET as Chris Cuomo will be co-anchoring live from Rio de Janeiro.