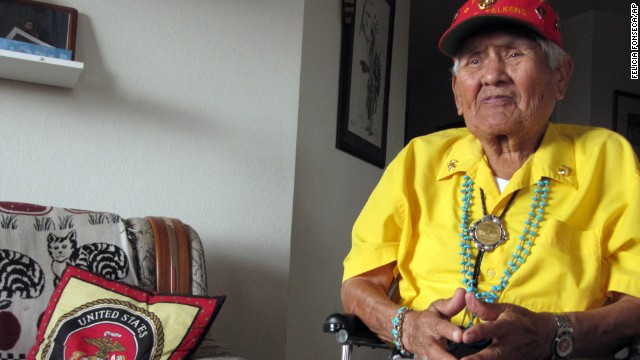 Chester Nez was silent for years about his role as one of the original Navajo code talkers.
June 5th, 2014
02:02 AM ET

Fallout continues: Senate members watched a "Proof of Life" video of Bowe Bergdahl yesterday. But it did nothing to convince some that swapping five Taliban terror detainees for the captured Army sergeant was the right thing to do. "For two days now, we've asked questions, many of which have not yet been fully answered," said Sen. Marco Rubio, a Republican from Florida.

Shooter on the run: A Canadian town is on lockdown after a gunman killed three police officers. "Shooter still believed to be in Pinehurst Subdivision area of Moncton. Stay locked inside. Leave outdoor lights on," authorities said this morning. Motorists are urged to stay away from the town in New Brunswick province.

Almost a done deal: After initially indicating he'd fight a sale of his team, Donald Sterling seems ready to move on. His lawyers say he will sell the Los Angeles Clippers to former Microsoft CEO Steve Ballmer. Price tag: a record $2 billion.

Wow..Donald Sterling is going to be a billion dollars richer after sale of the Clippers. The phony outrage crowd sure showed him

Internal report: If you drive a General Motors car, keep reading.  The car company will release its findings today on an investigation of an ignition switch defect. About 2.6 million cars were recalled worldwide for the flawed ignition tied to at least 13 deaths.

Your safety is paramount. Here’s what you should do if your vehicle is part of the ignition #GMRecall. pic.twitter.com/t0AZqJecfU

End of an era: For decades, Chester Nez kept silent about his role as one of the original Navajo code talkers who developed an unbreakable code during World War II.  He died yesterday at 93, the end of an era for the armed forces.

Work it, Prez! This leaked video of President Obama working out made us realize one thing: Some of us lift heavier weights than the leader of the free world. #Justsayin'

Swoon. Or not: It starts off with a romantic song for his girlfriend.  Then it takes on a different tune.

Inspired by baby: Dancers imitate a toddler, and the results will make you smile.

Reverse fun: Dominoes falling is a pretty cool visual. Now reverse that falling - and the awesome factor goes way up.