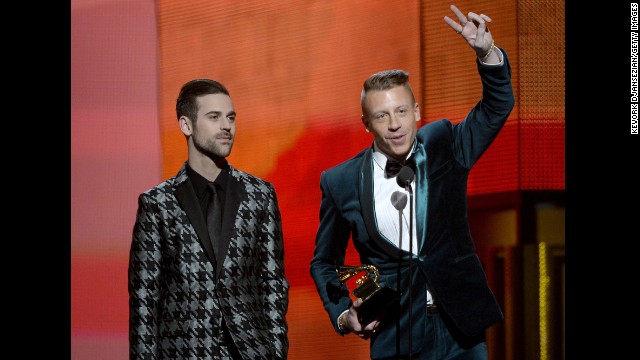 Macklemore, right, is under fire for a costume he recently wore than many consider anti-Semitic.
May 20th, 2014
05:30 AM ET

Voters head to the polls in six key primary states. The NBA moves to strip the Clippers from owner Donald Sterling. And Macklemore apologizes for a costume many find offensive.

Key races: It's one of the busiest days in this year's primary calendar. Six states from coast to coast are holding elections, and again anti-establishment candidates face long odds in high-profile Republican showdowns. Since its birth in 2009, the tea party has had a number of primary successes, but this year, the establishment learned to fight back, and so far has had the upper hand in most contests against tea party-backed challengers.

Searching for answers: After months of clamoring, the MH370 raw satellite data that families have been demanding may soon be publicized. Until now, Inmarsat, the company whose satellites communicated with the missing plane in its last hours, has declined to release it. But on Tuesday, Inmarsat and Malaysian authorities said they were trying to make the raw data accessible. Families want the data independently analyzed as they look for answers about what happened to their loved ones.

Deadline: The NBA has given Los Angeles Clippers owner Donald Sterling until May 27 to respond the league's move to terminate all ownership rights in the franchise. If three-quarters of owners go along with the plan, he would be forced to sell the team. His attorney wants the NBA to give Sterling a three-month extension, Sports Illustrated reported last night. The league has already banned Sterling for life and fined him $2.5 million for making racist comments.

Unsettled: The Thai army declared martial law today in a surprise move that an aide to the embattled Prime Minister said the government didn't know about beforehand. The aide called the situation "half a coup d'etat." Lt. Gen. Nipat Thonglek told CNN the move was not a coup. Still, details remain murky. Critics called it a departure from democracy. Stay tuned.

Under fire: Macklemore, who won a Grammy this year for a song praised for its cultural sensitivity, insists he wasn't stereotyping Jews with a costume he wore to a Seattle event Friday. The hat, big fake nose, black beard and wig were "a random costume" thrown together "so that I could walk around unnoticed and surprise the crowd with a short performance," the rapper said in an "apology to anybody that I may have offended" released last night.

- Storm chaser's delight: Check out the power and the beauty of a supercell thunderstorm in northeastern Wyoming.

- Flashmob for Amy: Friends fly in from five states to surprise a woman in the final stages of cancer for her 56th birthday.

- Startle reflex: Some folks just scare easier than others.

–Jazz time: If you normally only get your culture from yogurt, check out this impromptu concert that broke out on a Chicago train.

- A dog and his bucket: Who needs a stick when you have a large orange bucket to play with?