How Bad is California's Drought?

One thing contributing to the wildfires in San Diego County is California's persistent drought.

This map shows the entire state of California is in dire need of water.

Radley Horton, a climate scientist at Columbia University, helped us understand just how bad conditions are on "New Day" Friday.

Horton told CNN's Michaela Pereira the dark red area is experiencing the most severe drought, impacting about 25 percent of the prime land that's used for agriculture.

"It's competition for water in an area that could be short on water, even in a good year," he said.

In this graph, you can see the rainfall this year vs. normal levels of rainfall in major California cities.

This graph shows the decreased amount of rainfall dating back from July 1, 2013.

Horton explained California's last rainy season had about half the normal amount of rainfall throughout California.

"We had about three straight dry years," Horton said.

"Put it all together and we have major water shortage issues."

Here you can see the difference in the snowpack, basically California's water reserve, from 2013 – 2014.

Horton said the comparison above shows how desperate the situation looks this year.

He said the snow cover becomes is the reservoir for the state as the rainy season ends.

"Right now there's maybe a fifth the amount of water you'd normally expect in the snowpack for this time of year," he said.

And higher temperatures are only adding to the problem.

"As temperatures go up, that snowpack tends to get smaller."

Sister Carries Twin on Her Back Across Finish Line

In today's edition of the "Good Stuff," when one Illinois girl gets injured in a race, her twin sister comes to her rescue so they can finish together. CNN's Chris Cuomo reports.

Chloe Gruenke, 13, was running in a track meet when she says she felt "something pull and pop in my thigh."

The girl fell to the ground soon after.

That's when her twin sister Claire, who was also running the race, noticed Chloe.

She picked the girl up and carried her on her back for an entire lap and across the finish line.

"The energy from the crowd made me like, stronger. Love and sportsmanship – like even if you do help somebody, even if you're losing, it's still worth it."

See full story at CNN affiliate KTVI and if you have #GoodStuff news, let us know. 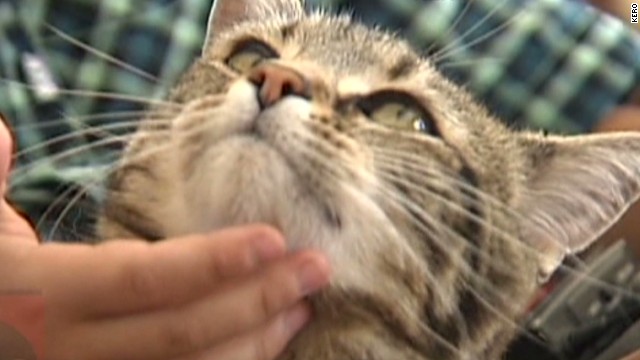 See Cat Make an Amazing Save

There's a lot of awesome in our favorite videos this week – everything from great dance moves to an unbelievable save!

We've narrowed these five viral videos down from all of the best ones on our Tumblr. Tweet us with the hashtag #NewDay and tell us which video is your favorite!

This adorable little boy wanted to bring his mom breakfast in bed, but the fruit bowl was a little too slippery and he just keeps dropping it. It’s the thought that counts!

We’re already jealous of this guy for his 300-day trip around the world, but we’re also jealous of his epic selfie skills. Maybe we need to plan a staff trip to try it out ourselves...

Has anyone ever enjoyed driving an ambulance this much? Doubt it. (Skip to a minute in for the best moves!)

This is undoubtedly the best video of the week. Cats aren’t usually the heroes, but this one more than makes up for it with his incredible speed and bravery. And, you know, saving a kid.

For the best viral videos every day, follow us on Tumblr!