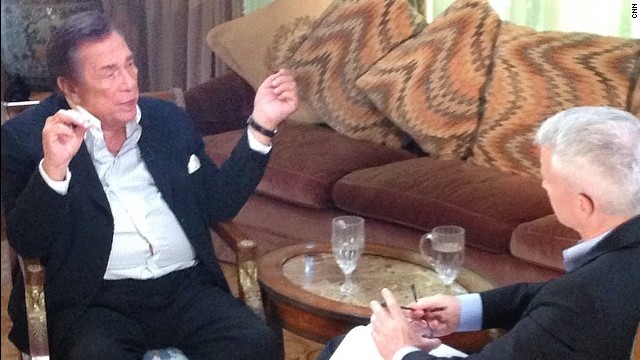 Five Things to Know for Your New Day – Monday, May 12

The owner of the L.A. Clippers apologizes for his racist comments. Michael Sam's draft day kiss ripples through the NFL and social media. And more severe weather threatens the nation's heartland.

Took the bait: Los Angeles Clippers owner Donald Sterling offered an apology and an explanation nearly two weeks after the NBA fined him and banned him for life for racist remarks made in a recorded conversation. "I'm not a racist," Sterling told CNN's Anderson Cooper. "I made a terrible, terrible mistake. And I'm here with you today to apologize and to ask for forgiveness for all the people that I've hurt." Sterling said he was "baited" into making the comments. "That's not the way I talk."

Public display of affection: Call it the kiss seen 'round the league. There's been no shortage of reactions to the lip-lock Michael Sam planted on his boyfriend after he became the first openly gay player drafted by the NFL. Disapproving tweets by Miami Dolphins safety Don Jones have landed him in hot water. The team has fined Jones. The Dolphins said his comments weren't consistent with "the values and standards of our program."

How do I explain Michael Sam to my kids? A man with TWO first names?

More expected: It's that time of the year. Cold air from the north and warm sticky air from the south are duking it out over the heartland. Sutton, Nebraska, and Orrick, Missouri, took the brunt yesterday as tornadoes damaged homes and businesses. More severe weather is expected today. Folks from the southern Plains to the Great Lakes region have the most to fear, according to the National Weather Service.

Independence vote: Early election results are out after Pro-Russian militants in eastern Ukraine held weekend referendums on declaring independence from Kiev. Perhaps to no one's surprise, nearly 90% in the Donetsk region voted in favor of independence from Ukraine and 10% voted against it, an election official said today. A CNN crew witnessed people casting multiple ballots at one polling station. A similar question was put to voters in Luhansk, where preliminary results were also expected today.

Still missing: The international effort to find the kidnapped Nigerian is picking up steam. U.S. and British officials are in the capital of Abuja to help look for the girls, plan rescue missions and advise on ways to quash the terror group. China and France are also helping in the search. In addition, Israel plans to send a team of counterterrorism experts to help, President Goodluck Jonathan's office said yesterday. There are few details on the international community will provide, but the United States has said it has no plans to send combat troops.

A sand sculpture on a beach in Puri, India, calls to #BringBackOurGirls in Nigeria. AFP pic.twitter.com/lmMkFJaVRD

- Hoppy times: It's a cute bunny eating raspberries. What more do you need to know?

- Kitty cuddles: Here's a cat that loves a good hug.

- Major save: Watch this trucker avert disaster with a clever maneuver.