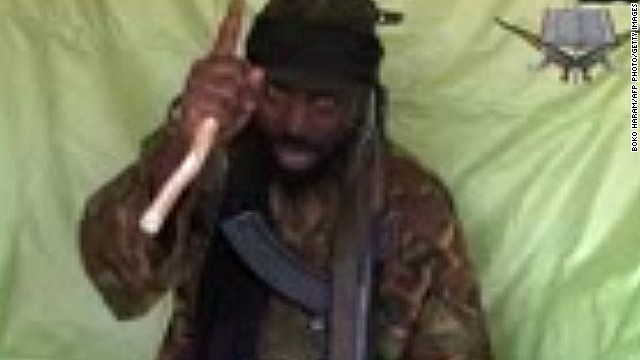 A man claiming to be the leader of the Nigerian Islamist group Boko Haram threatens to sell kidnapped girls.
May 6th, 2014
05:15 AM ET

For sale: A man claiming to be the leader of the Boko Haram Islamist militant group in Nigeria says he'll sell the more than 200 girls that the group has kidnapped. Boko Haram is a terrorist group receiving training from al Qaeda affiliates, according to U.S. officials. Its name means "Western education is sin." In a nearly hourlong, rambling video, Abubakar Shekau repeatedly called for Western education to end. The kidnappings have sparked global protests calling for the girls' release.

Clamp fails: That nasty accident over the weekend at a Ringling Bros. performance in Rhode Island was caused when a D-ring, also known as a carabiner, gave way, investigators say. The clamp was part of an apparatus supporting nine performers about 30 feet off the ground. Investigators aren't sure why the system failed and came crashing down. The carabiner was rated to hold 10,000 pounds but was supporting less than 2,000 pounds at the time of the accident.

Unrest rises: Ukraine is at the top of the agenda in Vienna, Austria, today as foreign ministers from across Europe huddle. The Council of Europe meeting comes amid a dramatic escalation of violence in Ukraine. Ukrainian security forces battled pro-Russian militants in the eastern flashpoint city of Slovyansk on Monday. Pro-Russian militants have taken a number government buildings across the nation's east. Government forces have done little to reverse their gains.

White House report: The Obama administration rolls out its climate change report today, and its predictions are meant to scare. How's this sound? Flooded rail lines. Plagues of pests and herbicide-resistant weeds. A rash of wildfires. Cats sleeping with dogs. (OK, so we added the last one.) Here's how a draft of the report spells it out: "Climate change, once considered an issue for a distant future, has moved firmly into the present." President Obama has pledged to renew his efforts to help the U.S. prepare for climate change during his second term.

Cause of glitch revealed: This is a case of where the old and new don't mix. Last week's computer glitch that temporarily paralyzed flight operations in Southern California was caused when the FAA's computer system misinterpreted the flight plans of a Cold War-era U-2 spy plane. Its complicated maneuvers so overtaxed the system's memory that other flight processing functions went on standby. More memory will be added soon, officials tell us.

- Waddle you going to do? This is what happens when a big-hearted guy decides to become mama duck to 13 ducklings.

- Not gonna do it: Some dogs love to chase and catch Frisbees. This one just isn't feeling it.

- Thanks a lot, guys: There's a basic rule of physics: For every action, there is an equal and opposite reaction. This is an example.

- Got your goat: California Highway Patrol officers turn into shepherds when these four-legged friends cause a ruckus on a freeway near Oakland.