Daredevil: 'There's No Such Thing as a Safety Standard in This Industry'

A single failed clamp caused an aerialist stunt in Providence, Rhode Island to crash to the ground on Sunday and injure nine performers, according to the lead investigator for the city's fire department.

As ongoing investigations continue, safety regulations in the circus have come under scrutiny.

"There's no such thing as a safety standard in our industry," said acrobat and daredevil Nik Wallenda on "New Day" Tuesday.

Wallenda, a 7th-generation member of the famous “Flying Wallendas” family, suggests more collaboration between circus performers and government regulators could help prevent accidents like this in the future.

"We have to step up as an industry and we have to take the lead on this and work with the government so that it's done in a proper way," he said.

THERE NEEDS TO BE MORE COMMUNICATION:

While a number of circus accidents have made headlines in recent years, the Occupational Safety and Health Administration (OSHA) can not provide information on how common workplace accidents are for circus performers.

Plus, according to CNN reporter Jean Casarez, licensing regulations do not require any state inspections.

This makes creating standardized safety procedures across the industry a difficult process.

On top of that, there seems to be a lack of agreement among policy-makers and performers on safety mechanisms.

According to Wallenda, just because performers have safety mechanisms, it doesn't necessarily mean they're safe. He says a vast majority of accidents in the industry are not related to the performer, but "it's the rigging that actually causes the accident."

As a result, individual circus performers often look at government regulations that might require them to wear safety harnesses and tethers as problematic.

Wallenda said he encountered this problem while preparing for his adventure crossing Niagara Falls. The government required he wear a harness, but he felt uncomfortable and unsafe with the way the company in charge handled the equipment.

"I was scared of that walk because of that tether that they put on me and the way they put it on me," he said.

"When outside resources come in and tell you how to do something you've done for 200 years, it makes it very difficult."

WHAT'S NEXT FOR SAFETY REGULATIONS IN THE CIRCUS INDUSTRY?

Wallenda says he wants to go to Washington to help create guidelines or a guidebook to oversee circus work.

He's also suggested mandating rigging inspections by an outside organization and tracking all equipment and the length of time its used.

As a benefit, Wallenda said if regulations can eventually cover everything, insurance costs would probably go down as well.

His biggest takeaway, though, is for performers to be proactive with their safety precautions.

“There are certain standards and it's about educating the people that are doing the rigging and often the performers themselves,” he said.

Nik Wallenda shows Kate Bolduan how to walk on a high-wire before his adventure crossing the Grand Canyon on June 21st, 2013. 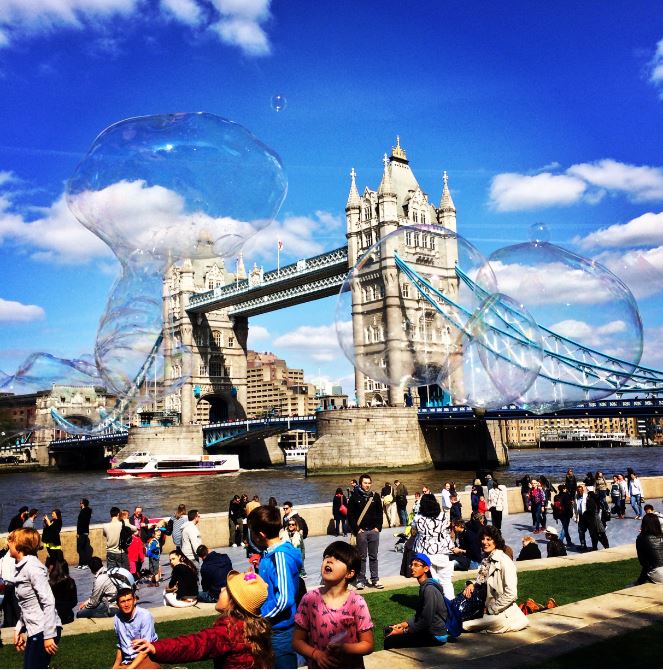 Photo of the Day: See Bubbles in London

In today's photo of the day, we highlight a moment from London that CNN international news editor Jethro Mullen experienced over the weekend.

"Bubbles by the bridge," he shared.

"It” is the controversial little scrap of papyrus, written in Coptic, that seems to have Jesus referring to “my wife,” in contrast to the traditional stance that affirms Jesus’ perpetual bachelorhood.

The quick backstory: In 2012, a Harvard professor, Karen King, brought this papyrus to the attention of scholars and the public.

Both the material and the script looked authentically ancient at first glance, and though the notion of Jesus having a wife was remarkable, these “lost” Christian writings, such as the Gnostic Gospels, are full of unorthodoxies.

It was good enough for King, who is widely respected in the scholarly world.

From the beginning, there were doubts, however, beyond the unlikelihood that the tiny scrap that survived the centuries would happen to be the one that contained the reference to Jesus’ wife.

The papyrus, along with a few other ancient papyri of lesser novelty, had been passed to King by an anonymous figure.

Anonymity, in the world of antiquities, is often a bad sign, compounding the inherent uncertainty when dealing with texts that are bought and sold rather than discovered in a firm archaeological setting.

Then there were aspects of the text itself that seemed suspicious.

For a fragmented scrap of papyrus, it seemed to have an awful lot of important content on it. Not only did Jesus refer to “my wife,” he also potentially described a certain Mary – perhaps Mary Magdalene? – as “worthy” and capable of being a disciple.

It is (almost) too good to be true.

See more on story at CNN.com/Belief

In this clip from today's "Inside Politics," CNN's John King showcases Seth Myers as the "Chief Supreme Court Correspondent," and Myers' insight into a new prayer ruling.