In today's edition of the "Good Stuff," an Atlanta boy escapes his kidnapper by singing a gospel song over and over for hours.  CNN's Chris Cuomo reports.

Willie Myrick was kidnapped from his family's own driveway by a man who threw him into a car, but the boy was released, miles away and three hours later, unharmed.

Myrick sang the gospel song  "Every Praise" until the kidnapper just couldn't take it anymore.

"He opened the door and threw me out," the boy said. "He told me not to tell anyone."

The story eventually reached Grammy Award-winning gospel singer Hezekiah Walker, the man who performed the song, and the artist flew to Atlanta to meet Myrick .

The kidnapper is still at large, but police are hoping a sketch provided above will lead to his arrest.

See the full story at CNN affiliate WXIA  and if you have #GoodStuff news, let us know!

Climber Joby Ogwyn was going to attempt to make the first wing suit flight off the summit of Mount Everest, and it was all going to be featured in a live television special.

But earlier this month, an avalanche struck the area just above the base camp, killing 13 Sherpa guides, including three guides from Ogwyn's team.

"It was a strange thing, I just happened to be awake," he told CNN's Michaela Pereira."It was early in the morning, about 6:45, and I heard it. It actually didn't sound like a really big avalanche. But I could tell it was from the general direction of the ice fall and I knew my guys and a lot of the other guys were up there. I unzipped the tent, I saw it come right over the top from camp one and covered up everybody I saw."

Ogwyn said after the tragedy, the mission to document his own adventure on Mt. Everest changed.

He said instead, what you will see in the Discovery Channel's "Everest Avalanche Tragedy," is meant to honor those lost in the avalanche.

"I think it will be a tribute to these guys and show how passionate they are about climbing up the mountain."

You can see the special on the Discovery Channel on Sunday, May 4, at 9 PM.

If you'd like to help the families of the deceased, visit: http://www.globalgiving.org/ 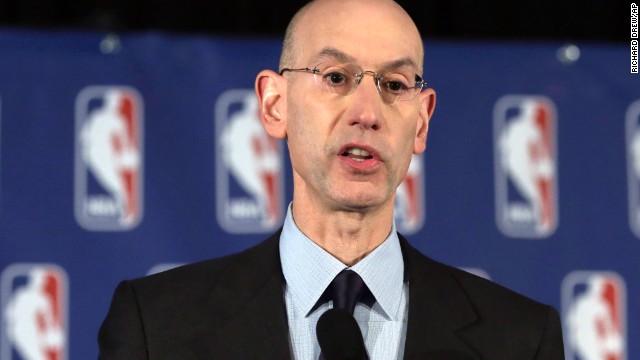 The NBA commissioner hands the owner of the L.A. Clippers a lifetime ban. More severe weather is in the forecast for the eastern United States. And an Oklahoma death row inmate dies in a botched lethal injection.

Banned for life: The reviews are in. NBA Commissioner Adam Silver scored a slam-dunk yesterday in banning L.A. Clippers owner Donald Sterling for life. A $2.5 million fine was also part of the deal. Oh yes, and there was a basketball game, too. The Clippers rebounded to win Game 5 of their playoff series with the Golden State Warriors, 113-103. L.A. leads the series 3-2.

Lots of rain: Severe thunderstorms may roar across the southeastern United States again today, bringing with them a slight risk of hail, damaging winds and tornadoes. About 37 million people are at risk in places like Jacksonville, Florida; Charlotte, North Carolina; Virginia Beach; Raleigh, North Carolina; and Atlanta, the National Weather Service said. Heavy rain will be the norm.

Lethal injection botched: One execution stopped midcourse, another postponed. Oklahoma corrections officials looked for answers yesterday after the death of inmate Clayton Lockett, who convulsed and writhed on the gurney after drugs to carry out his death sentence were administered. The execution was halted, but the result was still death. A second execution scheduled for yesterday has been put on hold while the state investigates.

Look here: A private company says it has found what it believes to be plane wreckage in the ocean, but those searching for Malaysia Airlines Flight 370 dismiss the claim. For one thing, the site where GeoResonance says it found the wreckage is in the Bay of Bengal, several thousand miles away from the current search area. The Malaysian government says it's worth checking into. The Australians, who are leading the search, say they'll keep looking in the southern Indian Ocean.

Returning to school: They left school two weeks ago on a field trip with hundreds of classmates. They came back today without the scores of students who died at sea. About 70 survivors from the sunken South Korean ferry visited a memorial at Danwon High School in Asnan, the school that sent 325 students on a field trip to Jeju Island. There were plenty of tears and the knowledge that life will no longer be the same.

- How not to celebrate: A graduate's backflip completely flops

- Who wants to go out? We think Yoda the Chihuahua does, once he stops spinning in circles.

- Mommy's having a baby: Future big sister is pretty happy about it, just hide all breakable glassware. Her squeals of delight are dog-whistle shrill.