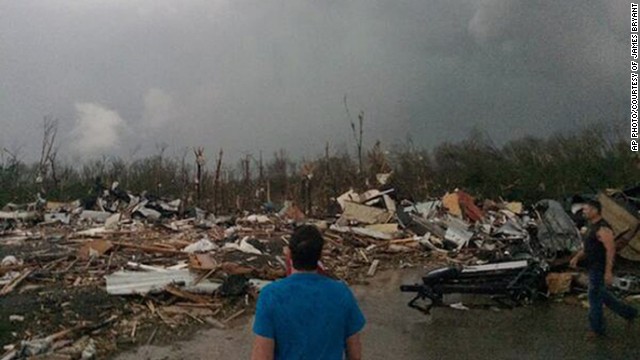 Tornadoes kill 17 in Arkansas and Oklahoma. The L.A. Clippers owner gets the silent treatment from his players after racist remarks attributed to him. And the search for Malaysia Airlines Flight 370 enters a new phase.

Heartland pounded: Brutal storms that roared across the central Plains and mid-South late last night have killed at least 17 people - 16 in Arkansas and one in Oklahoma. Some of the worst damage was north of Little Rock, Arkansas, where reported tornadoes devastated the towns of Mayflower and Vilonia. "It's chaos here," said Vilonia Mayor James Firestone. Winds from the storm in nearby Mayflower were estimated at 130-150 mph. More than 100 people were being treated at Arkansas hospitals.

First, the recordings. Now, the fallout: Los Angeles Clippers owner Donald Sterling got the silent treatment from his players as they reacted to racist comments attributed to him. Without saying a word, Clippers players removed their warm-up shirts ahead of yesterday's playoff game against the Golden State Warriors to reveal T-shirts worn inside out, hiding the team logo. They played the game, wearing their regular uniforms. The Clippers lost 118-97.

Roundup continues: South Korean authorities have arrested three more people in their investigation of the sunken ferry. The suspects are members of the Korea Shipping Association, and they're accused of destroying evidence. The ship's captain and 14 other crew members have also been arrested. At least 189 bodies have been found, and another 113 people are still missing from the sinking off the southwest coast of South Korea.

New penalties: Russia is expected to face new sanctions today for its actions in Ukraine, President Barack Obama told reporters in Manila, Philippines. The European Union also is expected to impose sanctions Monday on about 15 Russian officials who are believed to be undermining democracy and creating chaos in Ukraine, according to Western diplomats. The sanctions will include asset freezes and travel bans.

Let's try something else: The next phase in the search for Malaysia Airlines Flight 370 will be a more intense underwater search that will use private contractors and take months to complete. The cost? About $56 million, officials said today. "I regret to say that thus far none of our efforts ... have found any wreckage," Australian Prime Minister Tony Abbott said. MH370 disappeared on March 8 as it flew from Kuala Lumpur, Malaysia, to Beijing. It was carrying 239 people.

- Hamster power: If we could only find a way to harness the energy these little guys are generating.
http://www.youtube.com/watch?v=TupBR-i0Eeg&feature=youtu.be

- Eyeball this: Here's a cool trick to see clearly even if you forget your glasses. Really!

- Going to pot: Gusty winds in Utah pushed this porta-potty down the street at light speed. We now pause while you make your own jokes.
http://www.youtube.com/watch?v=2GOQyc748gA&feature=youtu.be

- Monkey slapped: This is why you never tease a monkey with food.
http://www.youtube.com/watch?v=1DEESmCppoQ&feature=youtu.be

- Don't mess with Mama: Lesson learned. Don't get between an African buffalo and her calf.