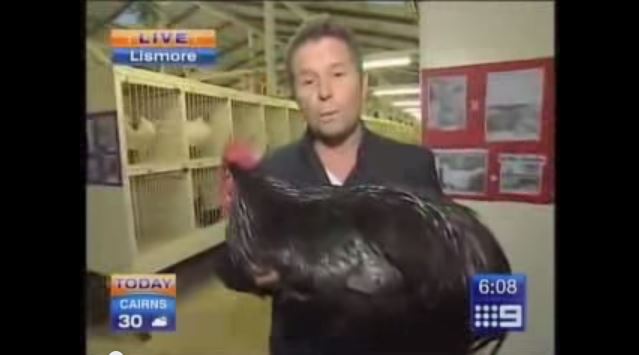 Our favorite viral videos from the week will bring you laughs, smiles and some secondhand frustration (think: traffic).

5. Cats gone fishing (for each other)

It’s funny and, let’s be honest, any sort of viral list without a cat video would be incomplete.

4. Reacting to a chicken attack

Journalists are typically known to get closer to danger. This reporter, however, panics when the bird he’s holding flares its wings. When he runs away, it’s absolutely priceless.

Traffic is one of the most frustrating parts of anyone’s day. But here’s Ethiopia to give you some perspective on why your drive home just isn’t that bad.

Don’t like a song? Light it on fire! It will be cooler, we promise. (Sorry, though; you probably shouldn’t try this at home.)

This is a two-for-one because these videos are both fantastic! The kids are psyched, and it’s because of generous people they don’t actually know.

This baseball fan cannot believe the stranger in front of him who caught a foul ball is just giving it away. It literally looks like it might have been the best day of his life.

He’s a big fan of NHL player Jordin Tootoo, and he probably just wanted to say hi. Tootoo stopped and gave the boy his hockey stick! The boy reacted by laughing and it almost sounds a little evil, but you know it’s all excitement.

Rob Lowe: 'My Son Going Off to College ... I Was Like a Spastic Mess'

Rob Lowe is a household name.

You know him for his many films, the TV series “Parks & Rec,” and of course “The West Wing.”

Now the actor is sharing his life, his story, and his Hollywood experience in his second book – “Love Life.”

"I felt the confidence, frankly, to tell some of the stuff I wanted to tell but didn’t really have the wherewithal to do with the first one," he says.

The book allows Lowe's fans to get a full portrait of the actor, from his wilder times at the Playboy Mansion to his sentimental moments being a father.

"My son going off to college... really painful for me.  Didn’t see it coming.  I was like a spastic mess," he shares.

Watch the full interview above to hear Lowe talk about his experience as someone  "too good looking to be taken seriously."

Cliven Bundy, the Nevada rancher turned conservative folk hero, joined "New Day" Friday morning to respond to the controversy surrounding comments he made about minorities and the federal government.

During the exchange with CNN's Chris Cuomo, Bundy remained steadfast in his views and used a number of props to emphasize his points, including a dead calf, the Constitution and his own boot.

HERE ARE 4 OF THE MOST EXTREME MOMENTS FROM THE INTERVIEW:

CUOMO:  Mr. Bundy, I see in your arms that you are holding a dead calf. What happened?

BUNDY: Well, this dead calf died this morning.  He's been without his mother two weeks, and we found him - actually Fish and Wildlife people down in Overton, Nevada, found this calf and called us.  We picked this calf up last night and tried to save his life.  He's been too long without a mother.  He's been badly abused - you can see his tongue here.  Let me lay the calf down -

CUOMO:  That's probably a good idea given it's a little early and a lot of families are watching, Mr. Bundy, so we don't want to upset them too much.

BUNDY: Well, you know they ought to be upset.  What's wrong with America?  They can't stand a dead calf?  We have a lot of dead calves around here.  I want to show you these bottles right here.  See these bottles right here?  They're going to feed calves that their mothers are dead or gone somewhere.  In other words, we've got about 27 calves.  This dead calf represents only one of many.  Americans too darn soft-hearted to see a dead calf?

BUNDY: No, I'm not a racist, but I did wonder that.  But let me tell you something.  You know, I thought about this this morning quite a bit.

That's what he was after, is not a prejudice thing, but make us equal.

CUOMO: I understand that Martin Luther King's message was one of peace and freedom, and that when you suggest that you were wondering if blacks were better off as slaves, that that's the opposite of freedom, and very offensive to people.  And I think you probably know that.

BUNDY: Well, let me tell you - I took this boot off so I wouldn't put my foot in my mouth with the boot on.  But let me see if I can say something.

You know, maybe I sinned and maybe I need to ask forgiveness and maybe I don't know what I actually said.  But, you know, when you talk about prejudice, we're talking about not being able to exercise what we think and our feelings.  We're not freedom - we don't have freedom to say what we want.  If I call - if I say Negro or black boy or slave, I'm - if those people cannot take those kind of words and not be offensive, then Martin Luther King hasn't got his job done yet.  They should be able to - I should be able to say those things and they shouldn't offend anybody.  I didn't mean to offend them.

#4) BUNDY HOLDS UP A COPY OF THE CONSTITUTION

CUOMO:  The Constitution in Article 1 Section 8 and in the Fifth Amendment gives the federal government the right to appropriate and purchase land.  Your state constitution recognizes -

CUOMO:  For purposes it deems appropriate.

BUNDY:  For what purpose can they do it?

CUOMO:  And it specifically –

CUOMO:  Oh, absolutely it does.  You should read the book instead of just holding it in your pocket maybe.  But when you look at your state constitution, it says that it respects the federal law.  And that's why your ranchers, your brother and sister ranchers, pay the fees that you refuse to.

Now you come on the show, you hold up a dead calf and that makes everybody upset.  But you should look at yourself for why the calf is dead, because if you paid the fees, this wouldn't have happened.  Isn't that a fair point?

BUNDY:  It's not a fair point at all.  This is the United States of America.  I live in a sovereign state, the State of Nevada, and I abide by all the state laws.  And I'll be damned if this is property of the United States.  They have no business here.  They have no business harassing my cattle, abusing this calf to the point he's dead.  They left this calf for two weeks without a mother.

Did you see the interview? WATCH HERE and let us know what you think in the comments below: