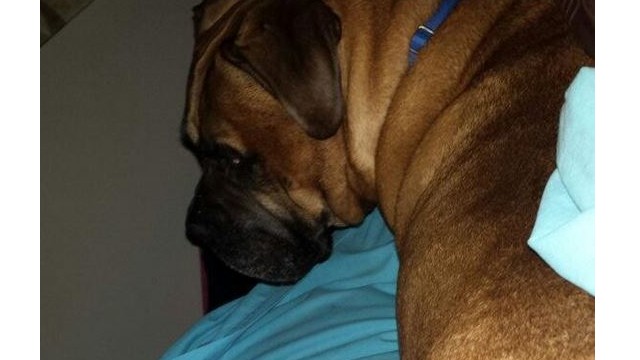 Photo of the Day: Bullmastiff in the Middle of the Bed

In today's photo of the day, we see an  early morning photo from an "Early Start" fan.

John Berman asked Twitter users Tuesday to send him a picture to prove they were awake.

Trish shared this photo: "How do you sleep with a small 90# bullmastiff in the middle of the bed?"

That's the explanation a crew member from the sunken ferry Sewol gave Tuesday for being unable to reach life rafts as the ship rolled over and began to sink.

Crew members made attempts to get to the lifeboats, the crew member said. "But we slipped so we could not do that."

The man was among four crew members who briefly answered reporters' questions outside a courtroom Tuesday following their arrest the day before on charges related to the disaster. The men appeared with their heads bowed and faces covered, making it unclear which of them was speaking.

They are among nine crew members facing charges, including the captain and two more who were arrested Tuesday.

So far, 121 people are confirmed dead and 181 remain missing nearly a week after the ferry sank, according to the South Korean Coast Guard.

The failure to deploy the lifeboats is one of a series of problems that beset those on board the sinking vessel last Wednesday.

A transcript of a radio conversation released by authorities over the weekend suggested that passengers on the ship couldn't reach lifeboats to escape because the ship tilted so quickly that it left many of them unable to move.

But the ship's captain and some crew members have come under heavy criticism, notably for the captain's decision to tell passengers to stay where they were.

In addition to the captain, two first helmsmen, one second helmsman, a third mate, the chief engineer, a technician and the two crew members arrested Tuesday face charges.

Biden to Ukraine: 'You Will Not Walk This Road Alone'

As the crisis in Ukraine shows no signs of easing, U.S. Vice President Joe Biden promised support for Ukraine and stressed that the United States won't recognize Russia's annexation of Crimea.

"Ukraine is and must remain one country," he said in Kiev on Tuesday at a news conference with Prime Minister Arseniy Yatsenyuk.

"No nation has the right to simply grab land from another nation," Biden said. "We will never recognize Russia's illegal occupation of Crimea."

Biden called on Russia to "stop supporting men hiding behind masks and unmarked uniforms sowing unrest in eastern Ukraine." He warned of additional sanctions if such "provocative behavior" does not end.

Ukrainian and U.S. officials say they think Russian special forces are in the region and are behind efforts to seize government buildings and generally promote unrest - a claim Moscow denies.

"You will not walk this road alone. We will walk it with you," Biden told Yatsenyuk.

As he spoke, the White House announced a $50 million package of assistance to help Ukraine pursue political and economic reform and strengthen its partnership with the United States.

Biden said he also expects an International Monetary Fund package for Ukraine to be finalized imminently.

The backing is likely to sit well with Ukrainian leaders struggling to keep their country afloat amid dire financial problems, the ongoing showdown with Russia over its annexation of Crimea and alleged interference in Ukraine's pro-Russian east.

MH370: 'The Families Have Basically Lost Their Patience'

A month and a half ago - 46 days - Malaysia Airlines Flight 370 vanished over the southern Indian Ocean.

The milestone is a somber one because it now allows attorneys to move in. There's a 45-day rule, enforced by the National Transportation Safety Board, that says American lawyers have to wait that long to reach out to a family that's lost a loved one in a plane crash.

What it means is that families can now file suit in American courts against U.S. aircraft manufacturer Boeing Co.

The only problem - no wreckage has been found. It's kind of like a murder case without a body.

Some relatives of those on board the missing plane said they hope legal avenues can bring new information to light.

"We don't feel we have a whole lot of other choices because we're certainly not getting any answers without (legal action)," Sarah Bajc, partner of Flight 370 passenger Philip Wood, told "New Day" on Tuesday.

The frustration among the families is that Malaysian officials give opinions, but no data, at their briefings.

Legal pressure on the Malaysian government, Bajc said, might force it to release data it holds.

Attorneys have approached families about compensation lawsuits, but Bajc said the feeling among the relatives is that they do not want to file lawsuits of that type to chase money.