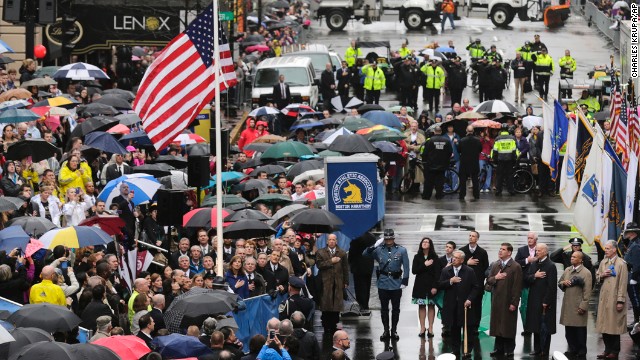 Technical glitches slow the underwater hunt for Malaysia Airlines Flight 370. Hundreds are missing after a South Korean ferry sinks. And Al Qaeda meets out in the open in Yemen.

Underwater scans: The search for Malaysia Airlines Flight 370 is a highly sophisticated affair. The underwater vessel looking for traces of the missing jetliner in the Indian Ocean resurfaced today ahead of schedule to fix a technical issue. It was the second day in a row the Bluefin-21 resurfaced prematurely - and went down again. None of these are big problems, just relatively short interruptions in what's expected to be a two-month mission to scan the entire search area.

Rescue operation underway: Rescue boats and helicopters scrambled to pluck passengers, most of them high school students, from a ferry as it slowly sank off the southwest coast of South Korea today. Of the 459 people on board, 164 have been rescued, the security ministry said. At least four people are known to be dead. Another 293 remain unaccounted for. It wasn't immediately clear why the ship sank.

People get ready: Yesterday’s first anniversary of the bombing came with two security scares, both involving backpacks. One turned out to have been left by a media outlet; the idea by a man. But it raises the question – how is Boston prepping for Monday’s race. Over at CNN.com we try to answer that question.

Out in the open: A new video shows what looks like the largest and most dangerous gathering of al Qaeda in years. And the CIA and the Pentagon either didn't know about it or couldn't get a drone there in time to strike. U.S. officials won't comment on that, but every frame of the video is now being analyzed by the United States.

Dissolved: A controversial New York Police Department surveillance unit that spied on Muslim communities has been disbanded, according to the department. The unit was developed with the CIA's help after the September 11, 2001, attacks. Two advocacy groups that filed a lawsuit challenging the unit said they were pleased it had been disbanded but also wanted to ensure that the surveillance has stopped as well.

–Hey, that's not a snowy mountain: And today's patience award goes to this big, fluffy white dog, who doesn't seem mind being a stomping ground for these little goats.

- Baby talk: It just goes to show you can't reason with a baby.

- They grow up so fast: Zero to 14 in 4 minutes. Frans Hofmeester is chronicling the life of his daughter Lotte. How does he do it? A few seconds at a time every week. Watch little Lotte grow up before your eyes.

- From dads everywhere: This protective papa lays down the law "To the Boys Who May One Day Date My Daughter."