It took only moments to feel the impact of what was happening here.

We had just landed in Conakry, the capital of Guinea. In the fields right outside the airport, a young woman was in tears. She started to wail and shout in Susu, one of the 40 languages spoken in this tiny country of 12 million people. The gathered crowd became silent and listened intently.

The young man sitting next to me quietly translated, although I already had my suspicions. He told me the woman's husband had died of Ebola, and then quickly ushered us away.

It is probably not surprising the airplane bringing us into Conakry was nearly empty, as are all the hotels here. Not many people in the United States have ever visited Guinea, or could even identify where it sits in West Africa. It is already one of the world's poorest countries, and the panic around Ebola is only making that worse.

Some of it is justified. That's because this time, the outbreak is different. In the past, Ebola rarely made it out of the remote forested areas of Africa.

Key to that is a grim version of good news/bad news: because Ebola tends to incapacitate its victims and kill them quickly, they rarely have a chance to travel and spread the disease beyond their small villages. Now, however, Ebola is in Conakry, the capital city, with two million residents. Equally concerning: it's just a short distance from where we touched down, at an international airport.

It has gone "viral," and now the hope is that it doesn't go global.

When I asked doctors on the ground about that scenario, they had split opinions. Several told me the concern is real but unlikely. Most patients with Ebola come from small villages in the forest and are unlikely to be flying on international trips, they told me. Furthermore, they don't think Ebola would spread widely in a western country; our medical expertise and our culture - not touching the dead - would prevent it.

Others aren't so sure.

No one wants to test that theory.

And follow Dr. Sanjay Gupta  and his producer Danielle Dellorto on Twitter for updates as they continue to report from the field. 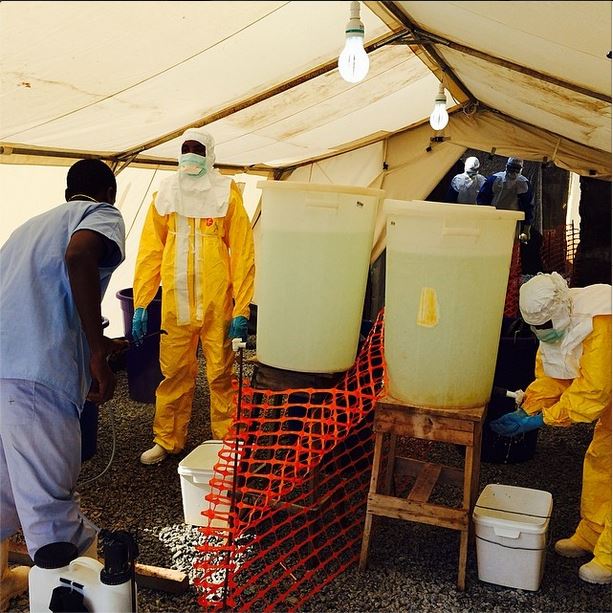 In our photo of the day, we get a behind-the-scenes look at CNN's coverage of the Ebola virus outbreak in Africa.

"The guys in yellow took blood samples of a few more suspected #Ebola patients. They are getting sprayed down before removing their protective gear. We followed them to the lab and were there when the test results came in. Two out of three new people tested positive for Ebola. One of the confirmed today has died."

CNN medical producer Danielle Dellorto shares her coverage as she's in the field covering this story with Dr. Sanjay Gupta.

An active weather trend began Sunday with gusty winds estimated over 60 mph and brought damage, possibly from tornadoes, from Texas to Iowa.

Louisiana, Mississippi, and Alabama may be impacted with dangerous thunderstorms.

But what about snow?

Dramatically colder temperatures behind the cold front means some places that had temperature in the 70s over the weekend will barely reach the 50s today.

Some snow will fall across the Plains and Upper Midwest today, with more for New England tomorrow.

Now for even more exciting news.

A total lunar eclipse occurs tonight.  It will be visible across North America, but most likely obscured by rain and clouds on the East Coast.

If you get a good view, however, let us know. Submit your pictures via iReport HERE and you may see them on "New Day" Tuesday.