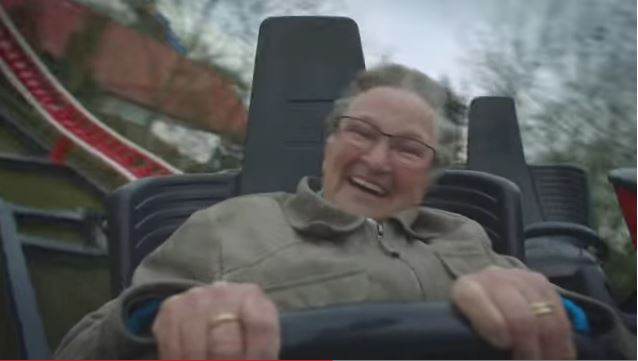 See How Grandma Responds to Her First Roller Coaster Ride

Here at "New Day,"  we love a good viral video.

Our staff is full of Internet junkies who are constantly sharing hilarious videos (in between prepping for the show, of course). The very best ones go on our Tumblr, and now, we’re counting down the top 5.

Max the cat is cute until he almost knocks you off your chair (yes, your chair) because he really, really wants to be in the box his owner is holding.

END_OF_DOCUMENT_TOKEN_TO_BE_REPLACED

The painstaking search for Malaysia Airlines Flight 370 got a vote of confidence Friday that the effort is headed in the right direction, but officials noted that much work remains.

"We have very much narrowed down the search area, and we are very confident that the signals that we are detecting are from the black box," Australian Prime Minister Tony Abbott said during an official visit to China, where he met with President Xi Jinping.

Abbott was referring to the plane's flight data recorder and the cockpit voice recorder. Locator beacons attached to them are designed to emit high-pitched signals, or pings.

Over the past week, four such pings have been detected by a ping locator towed by the Australian vessel Ocean Shield.

END_OF_DOCUMENT_TOKEN_TO_BE_REPLACED

Pistorius Accused of Hiding the Truth

Oscar Pistorius faced another day of relentless cross-examination Friday as the prosecution challenged his account of the killing of his girlfriend, Reeva Steenkamp.

Prosecutor Gerrie Nel has accused the athlete of hiding the truth about the death of Steenkamp, whom he shot last year through a closed toilet door in his home in Pretoria, South Africa.

His questions again sought to undermine Pistorius' reliability and credibility and to portray the Olympic athlete as someone who was inventing his version of events and "tailoring" evidence to suit his story.

As Nel turned once again to the early hours of Valentine's Day 2013, he repeatedly challenged Pistorius over his actions in the moments leading up to Steenkamp's death.

The prosecution's argument is that Pistorius shot Steenkamp intentionally after a heated argument. Pistorius does not deny shooting her but insists that he mistook her for an intruder.

Pistorius said he thought he heard the toilet door opening before he fired.

"I didn't intend to shoot. My firearm was pointed at the door because that's where I believed that somebody was," he said. "When I heard a noise, I didn't have to think, and I fired - I fired my weapon. It was an accident."

Nel, known in South African legal circles for his bulldog-like approach to cross-examination, responded to Pistorius' testimony almost with scorn.

"Your version is so improbable that nobody would ever think that it was reasonably, possibly true," he said.

Nel then hammered Pistorius on whether he had known Steenkamp was in the toilet when he fired.

"You knew Reeva was behind the door, and you shot at her," Nel said more than once.

"That's not true," Pistorius replied in a low tone.

That dramatic moment was when Nel asked for the trial to be adjourned until Monday morning.

Kathleen Sebelius - who weathered heavy criticism over the flaw-filled launch of the Obamacare website, then saw the program through as it topped a major milestone - is resigning as secretary of the Department of Health and Human Services, a White House official said Thursday.

President Barack Obama intends to nominate Sylvia Mathews Burwell, current director of the Office of Management and Budget, to replace Sebelius, according to the official.

A former Kansas governor and, before that, state insurance commissioner, Sebelius was sworn in as HHS secretary in April 2009.

Her time as head of the federal health agency coincided with the passage and implementation of the Affordable Care Act, the bill often referred to as Obamacare.

Sebelius came under fire last fall for the rocky rollout ofHealthCare.gov, the website central to the new law's implementation.

Watch this story and more from "Inside Politics" with John King above.