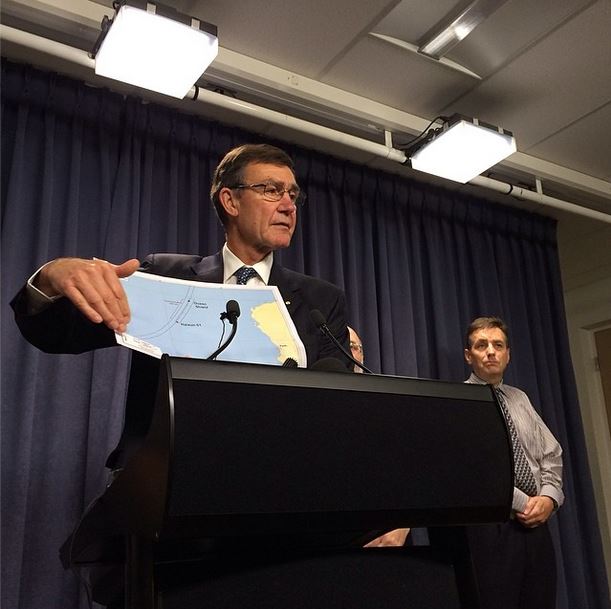 The Problems With Searching for Data Recorder in the Ocean

Searching for the data recorder of missing Flight 370 brings a lot of challenges in the Indian Ocean.

Beyond these difficulties, there are other underwater “pings” that could be mistaken for the flight data recorder – including seismic air guns used to look for oil and even the sound of whales.

On top of these challenges, the search area near the newly discovered sounds was impacted by Tropical Cyclone Gillian during the last days of March.

While at one time a category 5 storm with winds of 160 mph, Gillian was much weaker as it crossed over this search region, but questions remain as to what impact the storm might have had on debris.

This map shows where signals similar to pings from flight data recorders have been detected.

Teacher Sends Former Students Their Letters From The Past

In today's edition of the "Good Stuff," a retired teacher fulfills a promise he made to his students 20 years ago by sending them letters written by their former selves.  CNN's Chris Cuomo reports.

In 1994, as part of an English assignment,Canadian teacher Bruce Farrer had his 9th grade students write letters to their future selves.

He hung on to the letters for two decades, tracked down where they lived, and then, as he said he would, he mailed the letters out.

"I was trying to think of some assignment that would be special," Farrer said. "It just sort of came up."

By the time he retired in 2002, five large boxes had been filled with letters.

See the full story at CNN affiliate CBC  and if you have #GoodStuff news, let us know!

Spc. Ivan Lopez vented about a range of subjects on Facebook before his shooting rampage at Fort Hood in Texas, including his outrage at Adam Lanza's mass school shooting in Connecticut.

He wrote of experiencing overpowering fear after an insurgent attack in Iraq and the hatred that consumed him after getting "robbed."

Lopez took his own .45-caliber handgun onto the sprawling post Wednesday and killed three people and wounded 16 more before taking his own life, according to authorities.

They are trying to piece together what in his background and psychiatric treatment could have triggered a new round of bloodshed at the same Killeen post where an officer killed 13 people in 2009.

A 34-year-old Iraq war veteran with a history of depression and anxiety, Lopez was being evaluated for post-traumatic stress disorder before his shooting spree. He arrived at the post in February after being transferred from Fort Bliss in El Paso.

His Facebook posts, which were obtained from a Lopez family friend, appeared under the account name of "Ivan Slipknot," a reference to a heavy metal band. A family spokesman confirmed the account belonged to Lopez.

It is unclear whether his posts might help explain his mental state or a possible motive in the shootings. Authorities have said the motive is not known.

In early March, around the time investigators said he purchased the .45-caliber pistol used in the shootings, Lopez wrote: "My spiritual peace has just gone. Full of hate. Now I think I'll be damned. Last night I was robbed and I'm pretty sure there were 2 skinny ones. Green light and thumb down. That easy."

The details of the robbery are unknown. Killeen, Texas, police said the records department was closed Saturday.

In another Facebook post, Lopez talked about Lanza, 20, who killed his mother, Nancy, before fatally shooting 20 children, six staff members and himself at Sandy Hook Elementary School in Newtown in December 2012.

Lopez wrote that Lanza "pretends to be a victim of a mental illness followed by addiction to violent video games" and that the shooter sought "international attention" and a "minute of fame as a villain."

He added, "It is stupid to me that anyone can have easy access to a powerful weapon without being mentally evaluated. This makes the government indirect accomplice... These bastards have perfected their way of attacking studying previous massacres to gain publicity and their minute of fame as a villain. But thanks to Hollywood and the sensational profiling by the media [they] give more power to those intelligent cowards."

Another post dealt with his time in Iraq: "Celebrating life. It has been exactly 1 year and 2 days since left Iraq seeing in Fallujah the most brutal explosion... I was left paralyzed and started a discussion over the radio... I was only focused on breathing deeply so that I don't lose focus and continue the mission. [Those] were hours of agony waiting for an attack by the insurgency but we were able to exit Fallujah all alive. I was in vehicle #6.The worst was that #5 was a diesel truck, the perfect target. And I was only thinking about getting back with my family."

Lopez added: "To be in the line of fire is f-– up but even more f-– is the suffering of the families."

"So far, we have not discovered any specific traumatic event, wounds received in action, contact with the enemy or anything else specific that he may have been exposed to while deployed," the general said.

Grey said authorities had "credible information" that Lopez "was involved in a verbal altercation with soldiers from his unit just prior to him allegedly opening fire."

Messages left Saturday by CNN for Grey about the Facebook posts were not immediately returned.

In a statement Friday, Lopez' father, also named Ivan, asked for prayers for all those affected. He described the soldier as "a calm family man" and "a good son."

"My son could not have been in his right mind," he said. "He was not like this."

Before Wednesday's shooting, Lopez stopped at the post's personnel office to pick up a leave form, according to the sister of one of the soldiers injured in the attack.

Armetra Otis, sister of Sgt. Jonathan Westbrook, said on CNN's "The Lead" that her brother "was at work and a guy came in and asked for a leave form."

The soldier was told he would have to come back later, Otis said.

"And apparently I guess he didn't want to hear that, so he came back and just opened fire, " Otis said.

Westbrook was shot four times, but released from a hospital Friday, his sister said.

Law enforcement sources told CNN that investigators were searching for possible motives, including whether Lopez was angry over canceled leave.

If Lopez sought a leave this week, it wouldn't be his first.

Glidden Lopez Torres, a family spokesman, said Lopez' mother, Carmen, an emergency room nurse in their hometown, died of a heart attack in November. A month earlier, Lopez' grandfather had died in Guayanilla, a tight knit seaside community of 22,000 on the southern coast of Puerto Rico.

The spokesman, not related to the soldier, said Lopez attended the funeral but was disappointed that it took about five days for his 24-hour leave to be approved by the military.

In Friday's statement, the soldier's father said his son's medical treatment, the recent deaths of his mother and grandfather and changes related to a transfer of military installations "surely affected his condition."