Authorities have identified the man who opened fire at Fort Hood in Texas on Wednesday, killing three people before committing suicide, as Specialist Ivan Lopez.

Sixteen more people were injured Wednesday when he opened fire at Fort Hood, the sprawling Army post in Texas still on edge after a mass shooting there left 13 dead in 2009, officials said.

The gunman also died. He was engaged by military police before he fatally shot himself in the head, said the Army post's commander, Lt. Gen. Mark A. Milley.

Dr. Matthew Davis, Trauma Director at Scott and White Memorial Hospital, gave an update on the conditions of the patients at 11:37am ET this morning:

"We do have nine patients here at Scott and White, three of them remain in critial condition, and the remainder are in good condition. There is a possibility that some of them may actually be discharged from the hospital today..."

Find out what causes people to snap after being in war zones.

For more as this story develops, head to CNN.com.

Shootings at military installations are not uncommon. Last year, a shooting at the Washington Navy Yard left 12 people dead, and two people were killed at the Quantico Marine corps base in Virginia.

In 2009, there was the Fort Hood shooting that killed 13, and in the 1990s there were shootings at both Fort Bragg in North Carolina, and Fairchild Air Force base in Spokane, Washington.

Terry Lyles, psychologist and combat stress coach, spoke to John Berman and Michaela Pereira on @THIS HOUR to give some insight on what causes people to snap, and what kind of treatment people returning from war zones need.

What causes people to snap?

Lyles: There’s such a huge challenge in coming back from war and having to re-assimilate back into society, it’s not as easy as it sounds, obviously. But I think the biggest thing is that these individuals try to normalize after coming back and living in that kind of chaos… and it’s not easy to transition quickly and get back to society as we know it here in a safe community.

For the men and women returning from war zones, like Iraq and Afghanistan, what kind of treatment do they need?

Lyles: I work directly with the VA, I’m actually on a plane shortly heading that direction, and let me tell you, I think the VA is doing a great job with what they have to work with and they realize there’s a gap between coming back and treating for potential PTSD, and then actually putting a protocol together to help them. And that delayed process is part of the challenge. I know people that go months at a time without getting… the proper care that they need just because of the sheer number of the drawl down of the troops coming back. So there’s several potential challenges here, but the community at large, I think all of us, have a responsibility to support our soldiers and watch for signs, and try to help them in any way possible to re-assimilate back into society like most of us never have to do because we don’t go to that theater of war.

A doctor treating the injured from the Fort Hood shooting gives an update on the conditions of the patients. WATCH.

For more as this story develops, head to CNN.com.

Emanuel Opens up About Obamacare, Chicago

He also brags about his passion for education and his aims to turn Chicago into a tech town.

Watch an excerpt from the interview above and tune in to CNN Thursday night at 10 pm ET to find out more about  Emanuel  in CNN's original series "Chicagoland." 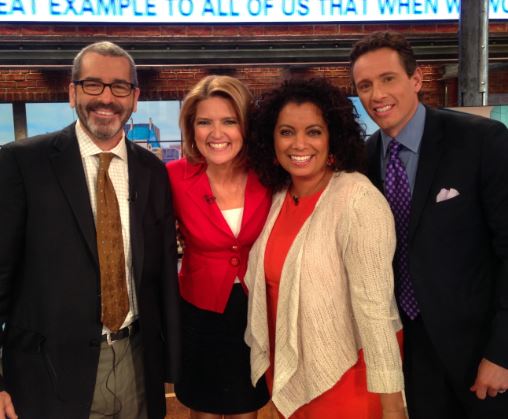