An Australian aircraft searching for the missing Malaysia Airlines Flight 370 has spotted two objects that could be retrieved by a naval vessel in the coming hours, authorities said Monday.

One object is "a grey or green circular object," and the other is "an orange rectangular object," the Australian Maritime Safety Authority said.

They are separate from "suspicious objects" reported earlier Monday by a Chinese military plane that was involved in search efforts in the same region, authorities said.

The reports from the search teams combing an isolated area of the southern Indian Ocean have once again raised hopes of meaningful progress in the hunt for the plane.

But none of the sighted objects have so far been firmly linked to Flight 370, which disappeared more than two weeks ago over Southeast Asia with 239 people on board.

END_OF_DOCUMENT_TOKEN_TO_BE_REPLACED

The sheriff of Snohomish County, Washington, points at a pile of muddy rubble and describes what he sees.

"You can tell from the debris this appears to be part of somebody's kitchen, the inside of the house," said Ty Trenary.

Authorities in rural Washington worked feverishly Sunday to find survivors after a landslide tore through the area north of Seattle, killing eight people and injuring seven. More than a dozen people are still unaccounted for.

"Total devastation. I mean, it's just unbelievable. It reminds me of what a tornado looks like when it's touched the ground," the sheriff said.

The Saturday landslide, which encompassed about one square mile, was caused by groundwater saturation tied to heavy rainfall in the area over the past month.

Trenary said rescue crews were working both sides of the slide. Authorities were also using helicopters to try to identify heat signatures, or people who may have been able to get free, he said.

But such work is complicated.

While there's a tremendous effort to rescue people who may be trapped, Snohomish County Fire District 21 Chief Travis Hots said Sunday that the rescue operation must be focused on keeping responders safe because the area is highly unstable.

The mud flow is like quicksand, he said. The landslide is 15 feet deep in some places.

Earlier Sunday, when just four bodies had been found dead, Hots had said that at least 18 people remained unaccounted for. It was not immediately clear how many still did.

He described the ongoing operation as an "active rescue," not a recovery effort.

Caroline Neal hopes her missing 52-year-old father Steven will still be rescued. He's a plumber who was on a service call when the land gave way.

"My dad is a quick thinker, and he is someone who takes action in an emergency," Neal told CNN affiliate KING. "If he had any warning at all, we just have to think he is somewhere and he's safe and they just can't reach him right now.

On Saturday rescuers dug through the rubble while survivors were crying for help underneath the debris. Rescuers heard voices around 11:30 p.m. and considered trying to reach the possible survivor or survivors, but "the mud was too thick and deep," Hots told reporters, and rescuers had to back off.

"Mother Nature holds the cards here on the ability of ground personnel to enter the slide area. It is essentially a slurry,"Washington Gov. Jay Inslee told reporters Sunday.

He called the rescue operation "aggressive."

"Every human endeavor ... is being explored here to rescue and find their loved ones," the governor said.

Inslee added that some rescuers had gotten "caught ... up to their armpits" in the slide and "had to be dragged out by ropes."

John Lovick, a county executive, addressed a reporter's question about whether voices were still being heard.

"We were told that there were noises in that area," Lovick said, stressing that fire chief Hots had decided that it was "too risky" to place rescuers in that area. "We are not hearing any reports of people hearing voices today or after last night."

Inslee said he plans to talk with federal officials about Federal Emergency Management Agency relief, adding that he'd never before seen firsthand the kind of devastation he witnessed by surveying the area by helicopter.

At least six houses were destroyed in the landslide, and as many as 16 were damaged, the Snohomish County Sheriff's Office said.

The landslide affected the towns of Oso, a remote community of about 180, and Darrington, a town of about 1,350 people. The landslide cut off State Road 530 to Darrington. Part of the Stillaguamish River also was blocked, and residents were warned of possible flooding both upstream and downstream of the collapse.

The Washington State Patrol provided photos that showed floodwaters and sprawling debris covering a rural patch of the road, framed by woodlands and snow-capped mountains.

Agencies including the state transportation and emergency management departments, the U.S. Navy and fire departments across Snohomish County responded.

The Snohomish sheriff warned people to stay clear of trestles or bridges anywhere near the Stillaguamish River downstream of the slide.

"Water could break through at any moment," the sheriff's office tweeted. 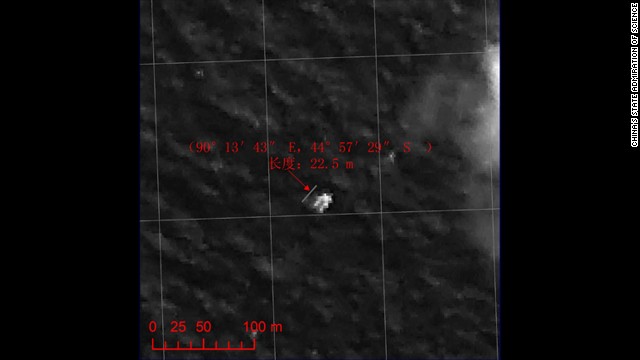 A Chinese satellite captured this image of a floating object in the Indian Ocean.
March 24th, 2014
02:09 AM ET
Comments (4 comments)

Foul play looks less likely in the disappearance of a Malaysian jetliner, the Russia-Ukraine crisis ups the ante in President Obama's European trip, and brackets are busted as March Madness roars through its first weekend.

A hole in a foul-play theory: Malaysian authorities said yesterday that the last transmission from the missing jetliner's Aircraft Communications Addressing and Reporting System showed it was heading to Beijing - a revelation that appears to undercut the theory that someone reprogrammed the plane's flight path before the co-pilot signed off with air traffic controllers for the last time. That revelation reduces, but doesn't rule out, suspicions about foul play in the cockpit.

On Monday, the crew of a Chinese plane searching for the missing Malaysia Airlines Flight 370 spotted "suspicious objects" in the southern Indian Ocean, Chinese media reported. The coordinates have been passed along to other search teams.

Death toll climbs: It's a muddy, dangerous mess in rural Washington, where a hillside gave way north of Seattle, killing at least eight people. Several others remain missing. The landslide cut off State Road 530, affecting the communities of Oso and Darrington. The mucky quagmire of rocks and earth covers about a square mile. The situation remains perilous, and authorities have warned residents along the Stillaguamish River, which is also blocked, that flooding is possible both upstream and downstream of the collapse. A month of heavy rains left the soil unstable, sending it down the hillside.

Focus on Ukraine: Oh, how a few weeks can change things. President Barack Obama's European tour - originally focused on nuclear security and a first-time meeting with the new Pope - has gotten much more timely. The White House now has to figure out ways to punish Russia for its forays into Ukraine and its annexation of Crimea. The trick is to find sanctions that America's European partners can go along with. Europe gets a lot of its energy from Moscow, so sanctions are a delicate balancing act.

All brackets busted: Warren Buffett and Quicken Loans are already breathing easy after a crazy first weekend of the NCAA basketball tournament. No one came out unscathed after the first four days of March Madness. To win the Billion Dollar Bracket Challenge, you had to pick the winner of every single tournament game. Although he didn't enter the big-money contest, Brad Binder got the furthest before Dayton's upset of Syracuse on Saturday ruined his run of perfection. I guess we all should have known better than to bet against the "Oracle of Omaha."

Internet spat: Netflix CEO Reed Hastings recently sounded off about the country's biggest Internet service providers demanding fees to ensure quick delivery of content from them and other data-intensive services. Well, they're not very happy with him either. The ISPs point to the fact that Netflix generates a massive amount of data consumption - around a third of traffic online during peak hours - while sticking them with the ever-increasing delivery costs. Don't expect this tug of war to end anytime soon. Ponder that the next time you sit down to watch an episode of "House of Cards."

- Aren't they a cute couple?: Seth Rogen and James Franco jump on the bandwagon and do their own version of the Kim Kardashian and Kanye West Vogue cover. Kermit and Miss Piggy spoofed it earlier.
http://instagram.com/p/l1GNGjy9bD/#

- Say goodbye to winter: Spring officially began last week. So, why not blow up a snowman?

- Selfie arms race: This is getting serious (not really, but we like hyperbole). First Ellen scored big with her Oscars selfie.

Now Jimmy Kimmel throws down the gauntlet with a trio of Clintons.

- Grizzly bears at play: This grizzly family plays in an Alaskan river before nibbling on a GoPro.