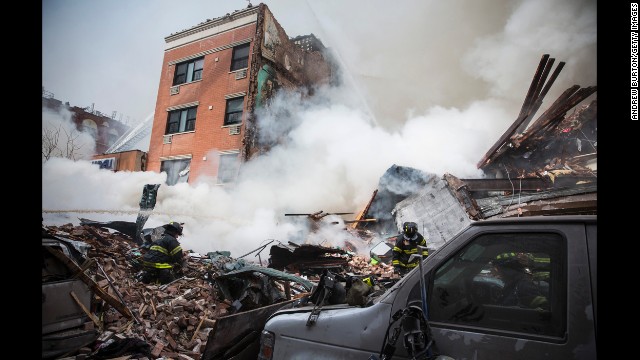 More clues, but more questions in the missing Malaysian jetliner investigation, diplomats are working overtime to find a solution for Ukraine and a drunk driver plows into a crowd at the South by Southwest festival in Texas.

More clues, few answers: The puzzle over the disappearance of Malaysia Airlines Flight 370 grew even more complex today when a report emerged suggesting the missing plane may have flown on for about four hours after its last reported contact. The report from the Wall Street Journal said U.S. aviation investigators and national security officials were basing their belief that the missing plane kept flying on data automatically transmitted to the ground from the passenger jet's engines.

Emerging from the rubble: When an explosion in Harlem collapsed two buildings yesterday, Collin Patterson was in one of them. He worked at a piano shop there. The blast was so intense, that it made the pianos fly up from the floor, then rubble crashed down around Patterson. But he crawled out alive, miraculously. At least six others weren’t as fortunate. They died. And police are still searching for nine more people who are missing.

My heart goes out to our neighbors in Harlem affected by today’s explosion. To the families of those who were lost, my prayers are with you.

Diplomatic push: Politicians and diplomats are working overtime ahead of this weekend's referendum that could see Crimea declare its independence from Ukraine. The vote will take place as Russian forces have secured the region. German Chancellor Angela Merkel addressed the German parliament on the matter, saying it was unconstitutional. Ukraine's interim Prime Minister Arseny Yatsenyuk will speak before the U.N. Security Council this afternoon. And U.S. Secretary of State John Kerry will leave for London this evening to meet with Russian Foreign Minister Sergey Lavrov. The meeting is expected to take place tomorrow.

Door details: Oscar Pistorius' lawyer grilled a police expert for a second day. Defense attorney Barry Roux picked at forensic expert J.G. Vermeulen's testimony on the validity of evidence presented by the door in the Olympic sprinter's murder case. Yesterday, Verneulen demonstrated how the Olympic runner bashed a bathroom door with a cricket bat after killing his girlfriend Reeva Steenkamp. Pieces of it are missing, and Roux wants them accounted for.

Car runs through crowd: At least two people died and 23 were injured at the South by Southwest festival in Austin, Texas, police and city-county medical officials said, when a drunk driver ran through a crowd early today. Police have a suspect in custody. Of the victims, 23 have been taken to hospital, Austin police said on Twitter. Five of them are in critical condition.

On pins and needles: Life at the Canning home must be tense. Daughter Rachel moved back in with her parents after taking them to court. She said they forced her out of the house, and so they owe her living expenses. And private school tuition. And college tuition. They said, nope; Rachel ran away, because she didn’t want to mind. A judge chided the teen for acting rude and denied some of her demands. But the suit isn’t over yet. It goes back to court in April.

Those are your biggies for the day. Here are a couple of others that are brewing and have the Internet buzzing.

–Totally nuts: Mohammad Rashid sets a world record by smashing 155 walnuts with his forehead in one minute during the Punjab Youth Festival in Pakistan this week.

- Lots of bacon: A North Carolina hunter bagged a 500 pound wild boar while hunting. He says it will feed his family for a good year. That's a lot of sausage, pork chops and tenderloin!

- Tanks a lot: Arnold Schwarzenegger is back and he's got a tank. It's big. It's bad and it crushes stuff. Enter a contest, give some money to a charity and you might get to drive it too.