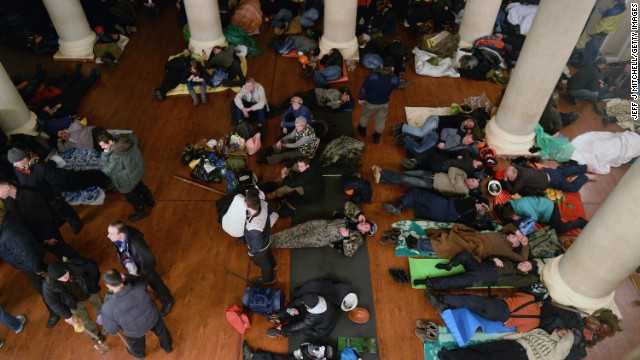 Five Things to Know for Your New Day – Thursday, February 20

Snaps up WhatsApp: Remember when you thought Facebook was too mainstream, too crowded for your taste and moved to Instagram? Then Facebook gobbled it up? So then you moved to messaging service WhatsApp? Well, Facebook's gobbled that up, too, for an insane $19 billion in cash and stock.  WhatsApp has about 450 million users, and Facebook founder Mark Zuckerberg says he’ll not aggressively boost  its revenue until that number gets to the “billions.”

It would be so meta when all these FB acquiring whatsapp jokes will be copied on FB and then will make their way to whatsapp forwards.

Christine Romans and CNN analyst Brett Larson will be live with the latest all morning.

Terrorism threat:  Oh, great. At this rate, we may as well wear flip flops to the airport. Not too long after the underwear and toothpaste bomb alerts, feds now say we should still be on the lookout for shoe bombers. Though the new alert is a result of new intelligence, sources say, there’s no specific threat or known plot.

Barbara Starr will bring us the latest at 6.

3. UKRAINE PROTESTS
Second day of killings : A shaky truce crumbled in Kiev this morning after violence left dozens dead a day earlier. Police and protesters battled for another day in the center of the capital today. As bullets whizzed, several demonstrators tumbled to the ground. At least 20 people were killed today, doctors for the protesters said.

Phil Black is live all morning with the latest.

4. WINTER OLYMPICS
Race for gold:  Today, all eyes will be on the U.S. and Canada. It's Round 2 for the rival teams in women's ice hockey tournament.  And boy, has it been a long wait for Team USA.  After winning the first hockey tournament in 1998, the U.S. women have had to watch Canada win. Every. Dang. Time. The showdown’s at noon ET. Other sports today include figure skating, curling and  halfpipe ski. Then there's the behind-the-scenes drama. Apparently, American luger Kate Hansen claims she had a special guest.

There were 24 medals given out in Day 12 of the Sochi Olympics. Medal tracker with 4 days of competition left: http://t.co/TDQoWcfY8S

Rachel Nichols will be live at 7 with the latest.

Husband speaks: A bizarre thing happened yesterday. Our Susan Candiotti received a phone call from the jailed husband of self-professed serial killer Miranda Barbour,19. And the teen still has a fan in her husband. Elytte Barbour professed his love in the call from a Pennsylvania jail, where he's awaiting trial as well. Police allege the couple lured a man using a Craigslist ad, strangled and stabbed him 20 times, then dumped his body. They allegedly went to the strip club after the killing.

BONUS BIGGIE: Angela Corey will be on at 7 and Jordan Davis' parents at 8.  Dana Bash will interview Ted Cruz at 6.

Jean-Claude Van Damage: Another shortie starring the muscles from Brussels.  This time, it ends in a bloodbath.

This takes the cake: Next time you get bored in a train, just listen to your music. Or, you know, put frosting on your cake.  This has staging written all over it.  We won’t even question why so many people would eat cake from a complete stranger in this day and age …

Tickled pink: Steve Betters lost a bet and had to dye his hair pink. Then he decided why not make a difference in a kid’s life?

Presidential diss: It’s not very often that someone gets an apology from the leader of the free world. University of Texas art historian Ann Collins Johns is one of the lucky few. President Obama wrote her a note after she let him have it for his comment knocking art history majors.