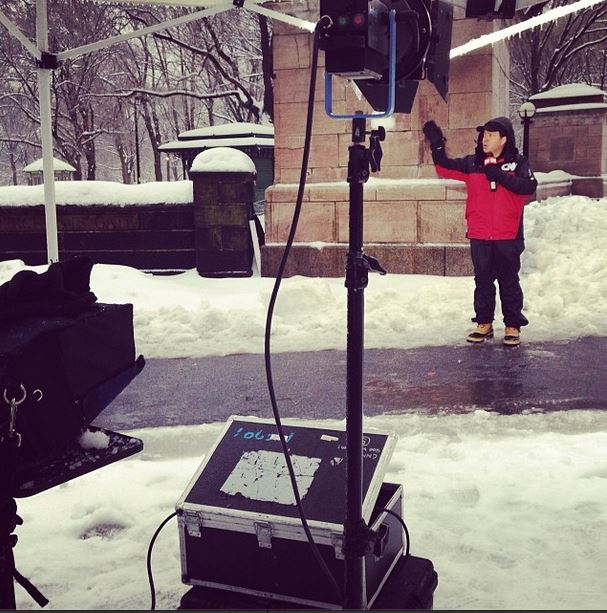 She Stops to Help Wreck, Gets Car Stolen

In today's edition of the "Good Stuff," a woman who stopped a kidnapping  gets her car stolen in the process. CNN's Chris Cuomo reports.

In Hawaii, Jennifer Jones witnessed an SUV plow into a concrete barrier right in front of her and immediately pulled over to help.

"There was a woman hanging half way out of the passenger side," Jones described to CNN affiliate KHON.

Jones pulled the woman out of the fiery wreck to safety but noticed there were two men in the car as well, and the driver was acting kind of shady.

That's when one of the men backed away and stole her car.

Jones didn't just respond to the scene of an accident, she helped break up a suspected kidnapping.

The injured victim is expected to pull through and the suspect in the passenger seat was nabbed.

The man who stole her car remains at large.

You can see the full story here  and If you have #GoodStuff news, let us know! Leave a comment, post on Facebook, or tweet to @ChrisCuomo & @NewDay using #NewDay and submit your story on iReport.

Do You Think "The Biggest Loser" Winner Went Too Far?

Let’s slim down to business.

Here's a before and after picture of the winner:

Watch Nischelle Turner's piece above and see if you think Frederickson lost too much weight.

Allen Lawyer: Abuse 'Did Not Happen'

Dylan Farrow may have believed she was telling the truth when she accused Woody Allen of molesting her as a child, but she is acting on false memories implanted by Mia Farrow, Allen's lawyer said Tuesday.

"I think that it is a continuation of Mia Farrow's desire to hurt Woody Allen," Elkan Abramowitz told NBC's "Today."

"And Woody Allen is now riding fairly high. He got the Golden Globes Award for Lifetime Achievement, which he totally deserved, and I believe it revived the anger she has towards him."

Dylan Farrow, who was adopted by Mia Farrow and Allen, penned a letter in the New York Times over the weekend, renewing charges first leveled two decades ago when the couple ended their 12-year relationship.

Abramowitz said Dylan Farrow, 28, "was a pawn" in the fight, "and the idea that she was molested was implanted in her by her mother, and that memory is never going to go away. So the fact that she says this now - that it happened 20 years ago - it's totally understandable."

Asked why Farrow would lie, Abramowitz said, "In my view, she's not lying. I think she truly believes this happened. That's what the vice of this is. When you implant a story in a fragile, 7-year-old's mind, it stays there forever. It never goes away."

The letter appeared in Times columnist Nicholas Kristof's blog hours before the Writers Guild Awards ceremony, for which Allen, 78, had been nominated for best screenplay for "Blue Jasmine." He did not win.

"What's your favorite Woody Allen movie? Before you answer, you should know: When I was seven years old, Woody Allen took me by the hand and led me into a dim, closet-like attic on the second floor of our house," Farrow wrote. "He told me to lay on my stomach and play with my brother's electric train set. Then he sexually assaulted me."

Kristof also wrote about it in his Sunday column.

But on Monday, the Times Public Editor Margaret Sullivan said in a column that she was "troubled" by issues raised in a letter from Chris Rasmussen, an associate professor at Fairleigh Dickinson University, who questioned "the propriety of publishing largely one-sided columns assailing a lone individual."

"If Dylan Farrow wishes to publish an open letter about her allegations, there are ample forums in this internet age," he wrote. "Should The Times and Mr. Kristof lend their credibility to her argument against Woody Allen?"

He cited a column by Robert B. Weide in "The Daily Beast" as raising "significant questions about the veracity" of Dylan Farrow.

The controversy dates to 1992, after the revelation that Allen, then 56, was having an affair with Soon-Yi Previn, Mia Farrow's 19-year-old adopted daughter with composer Andre Previn.

At the time, the actress accused Allen of having molested Dylan. The charge triggered a custody battle, with Allen going to court to get both of their adopted children and Satchel, their biological son, who now calls himself Ronan Farrow. A police investigation of the allegations ended without charges against Allen.

"They investigated the matter totally for six months and determined that Mia Farrow coached Dylan," Abramowitz told CNN. "They also determined that the molestation did not happen."

"The fact that it's coming up now 20 years later is remarkable because the matter was resolved," the lawyer told CNN's Erin Burnett OutFront.

According to an account in the Times, which covered the custody proceedings, "A team of investigators from Yale-New Haven Hospital that was retained by the Connecticut State Police subsequently concluded Dylan had not been abused."

Acting Justice Elliott Wilk of New York's State Supreme Court said "it was unlikely that Mr. Allen could be prosecuted for sexual abuse based on the evidence," the newspaper reported. "But while a team of experts concluded that Dylan was not abused, the judge said he found the evidence inconclusive."

A former prosecutor who decided against pressing charges in the case declined to comment Sunday on Dylan Farrow's accusation.

"As a prosecutor I really can't comment on the substance of the statement of this now young woman. As a father of a child not too much older than this young woman, I can only say I hope she finds some peace and solace in the way she's expressing herself," former Connecticut State's Attorney Frank Maco said. "I hope she had access to my written statement of decision. My statement is as valid today as it was 20 years ago."

In 1993, Maco, who is now retired, told reporters he believed there was probable cause to arrest Allen. But he said he decided, with Mia Farrow's support, not to press charges, "rather than exposing the child to possible harm."

Allen's lawyer responded in a statement e-mailed to CNN on Monday: "It is tragic that after 20 years a story engineered by a vengeful lover resurfaces even though it was fully vetted and rejected by independent authorities. The one to blame for Dylan's distress is neither Dylan nor Woody Allen."

Allen representative Leslee Dart said in a prepared statement Sunday that Allen "read the article and found it untrue and disgraceful."

"At the time, a thorough investigation was conducted by court appointed independent experts," Dart said. "The experts concluded there was no credible evidence of molestation; that Dylan Farrow had an inability to distinguish between fantasy and reality; and that Dylan Farrow had likely been coached by her mother Mia Farrow. No charges were ever filed."

Dylan Farrow's letter addressed this: "Woody Allen was never convicted of any crime. That he got away with what he did to me haunted me as I grew up," she wrote. "I was stricken with guilt that I had allowed him to be near other little girls. I was terrified of being touched by men. I developed an eating disorder. I began cutting myself."

Kristof, who described himself as a friend of Mia Farrow and Dylan's brother Ronan Farrow, said Dylan Farrow is now happily married and living in Florida.

Mia Farrow did not immediately return a request for comment. But in a tweet posted Monday night, she said, "I love my daughter. I will always protect her. A lot of ugliness is going to be aimed at me. But this is not about me, it's about her truth."

Dylan Farrow's letter and Twitter postings by her brother attacking his estranged father come as Allen and his latest film, "Blue Jasmine," are up for honors during Hollywood's annual awards season.

When the Hollywood Foreign Press Association gave Allen a lifetime achievement award at the Golden Globes last month, his son tweeted: "Missed the Woody Allen tribute - did they put the part where a woman publicly confirmed he molested her at age 7 before or after Annie Hall?"

Academy voters begin casting Oscar ballots on February 14. Allen and his cast are up for three Academy Awards, including best original screenplay for Allen, best actress for Cate Blanchett and best supporting actress for Sally Hawkins.

Dylan Farrow admonished actors by name for "turning a blind eye" and for continuing to work with Allen. One of them, Alec Baldwin, who starred in "Blue Jasmine," fired back Sunday to those who had asked him to respond to the allegations. "You are mistaken if you think there is a place for me, or any outsider, in this family's issue," he wrote.

In another post, he slammed someone who asked whether he owed Dylan Farrow an apology: "What the f&@% is wrong w u that u think we all need to b commenting on this family's personal struggle?"