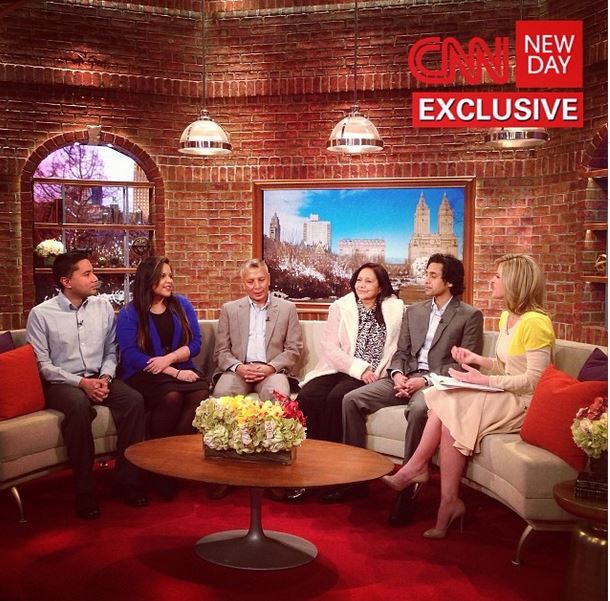 When it comes to who is happier - parents or child-free people - most of the research up until now has concluded that it is the childless who are more satisfied with their overall lives.

As a married mom of two, I always find myself reacting a bit defensively to that research.

"I'm happy," I say to myself. I may be stressed, sleep-deprived and sorely in need of "me" time, but I am very satisfied with my life. Isn't it possible that I could be just as happy as someone without kids - even if they have more time to sleep and take care of themselves?

According to two new studies, the answer might be yes and no.

A report by Princeton University and Stony Brook University published in the Proceedings of the National Academy of Sciencefound "very little difference" between the life satisfaction of parents and people without kids, once other factors - such as income, education, religion and health - were factored out, said Arthur Stone, one of the study 's co-authors.

People with kids living at home tend to have more money and are more highly educated, more religious and in better health, said Stone, a professor of psychiatry and psychology at Stony Brook University. "All of those are factors that go along with people having better life evaluations."

Once those factors were statistically removed, the study found no difference in how satisfied the two groups felt about their lives.

Stone said in an interview that similarities in reported happiness among parents and the child-free, especially in developed countries like the United States, can be chalked up to priorities, specifically whether a person chooses to have kids.

"I choose an orange because I like oranges. You choose an apple because you like apples. There's no reason to think that your experiences should be any better than mine," said Stone. "The orange is different than the apples. Having kids is different than not having kids. It doesn't mean that one is ... intrinsically better."

Sarah Maizes, author of the children's book "On My Way to Bed" and a mom of three in Los Angeles, agrees. "It's like asking who's happier - people who like pizza or people who like Chinese?" she said on Facebook. "Now what I'd like to know is who lives longer. ... That you can measure!"

The Princeton-Stony Brook study - which involved an examination of a survey of 1.8 million Americans, including parents between the ages of 34 and 46, conducted by Gallup from 2008 through 2012 - did find one difference between parents and the childless: Parents tend to experience more highs and lows.

"They have higher highs. They have more joy in their lives, but also they have more stress and negative emotions as well," said Stone.

Justin Bieber got some unexpected visitors Tuesday morning: sheriff's deputies with a warrant to search his home.

Investigators with the Los Angeles County Sheriff's Department were looking for video from Bieber's security cameras that might show what happened Thursday night when eggs were thrown at a neighbor's home, according to a sheriff's statement.

A judge gave deputies a felony search warrant, which they carried out Tuesday morning, the sheriff's statement said.

Bieber and several house guests were asleep in the home when deputies arrived at 8 a.m., according to Los Angeles County Sheriff's Lt. David Thompson. He was cooperative with the dozen deputies, but he did not answer questions about the alleged vandalism, Thompson said.

Bieber hasn't spoken to investigators about last week's incident, and his representative had declined comment to CNN.

Like it or not, the Robertson family of A&E's hit reality show "Duck Dynasty" returns to the airwaves tonight and by all signs, a whole lot of people still like it a lot.

Last month, the show's future was in question when show patriarch, Phil Robertson, was temporarily suspended from filming after an interview with GQ in which he questioned whether blacks suffered under Jim Crow, and was crudely critical of gay Americans.

So, could the scandal actually help the show? Robertson was quickly re-instated by A&E and industry insiders expect record-breaking ratings tonight

It's already the second-highest rated series on cable TV, pulling in an average of nearly 14 million viewers and practically printing money with duck-themed products available at stores like Wal-mart, Target and Kohl's.

Forbes estimates their merchandise brought in about $400 million in 2013.