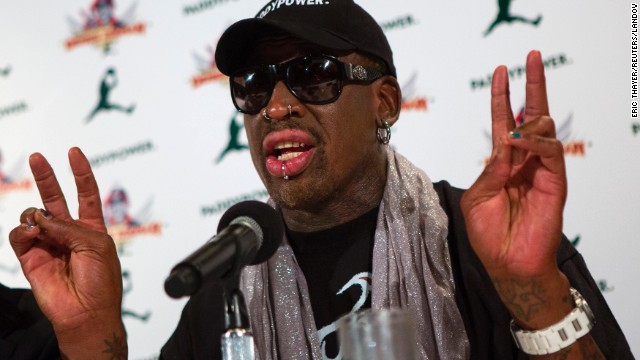 5 Things to Know for Your New Day - Wednesday, January 8

Dennis Rodman's on the defensive, a former secretary of defense tells all, and we may be saying goodbye to the polar vortex.

1. DENNIS RODMAN
Major fallout: Dennis Rodman’s bombastic outbursts yesterday during CNN's exclusive interview have both angered and bemused many. Rodman tried to explain his reasons for taking a team of retired NBA players to North Korea, but the interview with Chris Cuomo got heated. Well, Rodman got heated. And during the yelling, Rodman seemed to imply that Kenneth Bae, a U.S. citizen who was sentenced to 15 years in a labor camp in North Korea, had done something wrong. The reactions Rodman garnered are not unlike the ones he used to get during his NBA basketball career. He spent much of his playing days careening between being an immensely talented player and standing out as a sideshow attraction. Yesterday was another addition to a growing list of curious Rodman moments.

The fallout was major. The NBA distanced itself. Several lawmakers said Rodman was wrong. Bill Richardson, a former U.S. ambassador to the United Nations, also bashed Rodman, saying he was "disappointed" by the former NBA star's performance. "I think Dennis Rodman crossed a line this morning by implying that Kenneth Bae might be guilty, by suggesting that there was a crime," said Richardson, who worked to secure the release of an American held in North Korea in 1996.
Today's the day Rodman and his crew of NBA old-timers are set to play a basketball game against the North Korean Senior National Team. But it almost feels like the game already happened. And Rodman lost.

Dennis Rodman at best sounds pretty naive, at worst, a guy who isn't so bright being used as a propaganda tool for the North Korean leader.

Note to Dennis Rodman and those U.S. players: You do know that you're SUPPOSED to lose that game of yours, right?

Chris Lawrence will be live on this story. Former NBA player Greg Anthony and former U.S. Ambassador to the United Nations Bill Richardson join us at 7. Terri Chung, Kenneth Bae’s sister, is set to join us at 8.

2. GATES BOOK
Book of bombshells: If you have some questionable things to say about your bosses, you may want to wait until you retire. It seems that’s what former Defense Secretary Bob Gates did. And now that Gates has left office, he's put some of those thoughts in a book. The book, “Duty: Memoirs of a Secretary at War," has not been released. But a review by Washington Post reporter Bob Woodward has. And if the excerpts are any indication, this is going to be a juicy tell-all. The excerpts offer scathing critiques of President Barack Obama, fierce jabs at Vice President Joe Biden and an unflattering mention of former Secretary of State Hillary Clinton, Woodward said. While there's praise sprinkled in for Obama and Biden, some say the Gates book could have a lasting effect. It could affect the upcoming presidential race.

I had always respected former SECDEF Bob Gates for his statesmanship, but taking potshots at @BarackObama ex post facto is not classy IMO.

Jim Acosta will give the latest on this story.

3. FRIGID WEATHER
Thawing: Here’s the good news: Some of you will get to stop using strange phrases like polar vortex. Or lake effect. Or Snowpocalypse. Or Coldorampolapia. (OK, we made that last one up.) But the good news is this historic chill is lifting. Yeah! And it has been bad. Temperatures plummeted below freezing somewhere in all 50 states yesterday morning. But the heat's coming back for many of us today. And by Thursday, forecasters say, most of the country will be back to normal.

The gap between you and your significant other, while lying in bed, where cold air sneaks under the covers is now known as a Polar Vortex.

I hope that everyone in the cold states, stay warm. I'll see all of you soon. Have a good night. #peaceandLoVE

Indra Petersons, Ana Cabrera and Pamela Brown will all report on this story.

4. LINDSEY VONN
No Olympics: One of the most noticeable faces in skiing released some bad news yesterday. Lindsey Vonn said her knee problems were going to be too much for her to compete in next month's Winter Olympics in Sochi. "I am devastated,” she said on her Facebook page. The news came 11 months after she hurt that right knee at the world championships. The American champion skier, who's dating golfer Tiger Woods, says she'll have surgery and will focus on strengthening the knee. “On a positive note, this means there will be an additional spot so that one of my teammates can go for gold," Vonn added.

Lindsey Vonn out of Olympics, says: "I am devastated...the reality has sunk in that my knee is just too unstable."

I am devastated to announce that I will not be competing in Sochi. My FB page has the whole story. http://t.co/7KHSXa0xYJ

Mike Pesca from NPR will join us at 6 to talk about this.

5. TEEN KIILED
What happened? “We called for help, and they killed my son.” That's what a North Carolina family is saying about the recent death of a teen at the hands of an officer. The shooting is being investigated, and a local prosecutor says it's too soon to pass judgment. It's not completely clear what happened. Keith Vidal, 18, died Sunday. The teen was schizophrenic and was having an episode  when the family called police for help. Three officers showed up, and the situation spiraled out of control, the family says. "There was no reason to shoot this kid," the teen's stepfather, Mark Wilsey, told CNN affiliate WECT yesterday. "They killed my son in cold blood. We called for help, and they killed my son."

Today at 5 on WECT: Keith Vidal's family says it's hiring lawyers. He was killed in an officer involved shooting. pic.twitter.com/9UziWHsb0M

David Mattingly reports on this story.

Polar vortex rap: Have you been wondering about that strange term that has been on the news lately? Polar vortex. This hip man in a hospital bed explains it to you.

Dog whisperer: Yeah. ... This was the last straw. Right after this video, they got voice lessons for the poor pooch here.

What time is it? This company came up with the great idea of a clock that doesn't tell you what time it is. Instead, it vibrates every five minutes. Confused? Watch this video.
[youtube="http://www.youtube.com/watch?v=AeeaemmuveU&utm_source=buffer&utm_campaign=Buffer&utm_content=buffer9060e&utm_medium=google"%5D

Snow day for Gonzo: Meet Gonzo, one greyhound who hates going out in the cold. But Gonzo did allow his family to put a coat and boots on him for a sec.

Raccoon mechanic: This raccoon looked like he knew what he was doing until they saw the bill.
[youtube="http://www.youtube.com/watch?v=uiDeOBLHWrA&feature=youtu.be"%5D