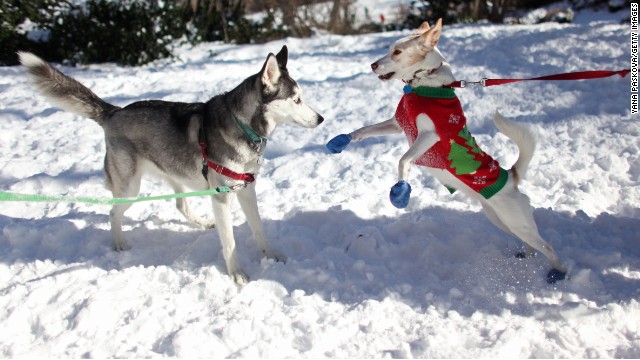 5 Things to Know for Your New Day – Monday, January 6

The deep freeze is far from over, a new twist in the Jahi McMath story, and Liz Cheney calls it quits.

Welcome to the Monday edition of "5 Things to Know for Your New Day."

It's only gonna get worse: Yes, it's winter. And yes, it's cold. But this is different.  Mercury will plummet, 20-year records will shatter and nearly half the nation will shudder in zero or below temperatures. But wait ... there's more. If you're traveling, be ready to sit at the airport.  More than 2,000 flights have been canceled today, a flight tracking website says.  In the Midwest, schools, churches and some businesses shuttered their windows.  Experts are referring to the rotating pool of cold, dense air as a "polar vortex." We're not that fancy. It's just a big, bad, deep freeze to us.

Grab a hot cup of cocoa as George Howell brings us the latest all morning.

Senate run, no more: Liz Cheney's bid for a Senate seat in Wyoming started off on a rocky note.  Republicans - and her own family — were not amused by her surprise announcement last summer.  Her public dispute with her lesbian sister, Mary Cheney, over same-sex marriage didn't help her image, either.  Sources now say Liz Cheney is dropping out of the race.  The oldest daughter of former Vice President Dick Cheney could make an official announcement today. Her dad represented the state in Congress for five terms before moving up the food chain.

I hate to see her go. She was going to be some good entertainment! http://t.co/BJmquZKKF4

In her mother's care: In the latest twist to this heartbreaking story, Jahi McMath was released to her mother yesterday.  Doctors in California declared the 13-year-old brain dead after tonsil surgery last month.  She's been on a ventilator since then. A fierce court battle unfolded between devastated relatives fighting to keep her on the ventilator and doctors arguing that she's already dead.  But her family is not giving up on her.  Yesterday, a coroner handed her over to her mother, Latasha Winkfield.  Though her destination was not disclosed, a New York facility says it's ready to care for her.

Her name is Jahi McMath. Her name is not Brain Dead. In family photos she looks like she was a vibrant and beautiful young girl.

#JahiMcMath attorney "This has brought out the best in people and the worst in people", so her whereabouts won't be revealed for safety.

Many more achoos: This year's flu season just keeps going, and going. The number of states reporting widespread flu activity has skyrocketed to 25. And the atypical thing is this year's most common strain is H1N1. If that sounds familiar, it's the same virus that caused the 2009 swine flu outbreak. Folks in the South should especially be careful. The most severe activity is in those states. The CDC has everything you need to know here.

It's about that time...#flu season is getting worse. To get the facts & find out what we need to do, we're talking to @DrRoshiniRaj! #NewDay

It's a good thing I don't have a boyfriend because it's cold & flu season y'all can keep ya germs, I'll kiss my germ ex

Elizabeth Cohen will give us the latest at 6.

Basketball diplomacy: North Korean leader Kim Jong Un is an avid basketball fan. And what a ruthless leader wants, he gets. For Kim's 31st birthday, basketball star Dennis Rodman is headed to the secretive nation with a bunch of NBA old timers to play a game in his honor Wednesday. Never mind that the unpredictable young leader had his uncle and a close aide executed not too long ago. Rodman has pressed on with the plan.  The former NBA player won't let international condemnation of the country's human rights record come between him and his buddy.  He's told Kim he has "a friend for life." Well, let's just say this is "diplomacy" with no diplomatic support whatsoever.

Any possibility Dennis Rodman will defect to North Korea? We can always hope.

Karl Penhaul will give us the latest details at 6.

Creepy, sexy, cool: Good lawd! This Old Spice commercial creeped us out. But it also had us cracking up! A montage of moms crooning about their sons’ sex appeal is a bit on the weird side.  This is the kind of ad that will haunt your dreams.

Just watched the new old spice commercial. I seriously can't breathe! This is literally the most hilariously odd video i've ever seen.

Forget selfies: This ambitious dude took two photos of himself daily for three years to complete this lip sync.  Think about that the next time you pucker up for your lil’ selfie.

A hairy mess: This might be your worst creepy crawly nightmare.  It sure was ours.  Lesson learned: Don't go around poking spider-like objects.

Making do: If you can’t find a cigarette lighter, be a little creative. Like use an excavator, maybe?

Nifty fun:  In this weather, jumping on a frozen trampoline may be the next cool thing.

There you go. All you need to know to get an early start to your morning. Be sure to tune in to "New Day" from 6 to 9 a.m. ET. Join us at NewDayCNN.com, and go and have a GREAT NEW DAY!