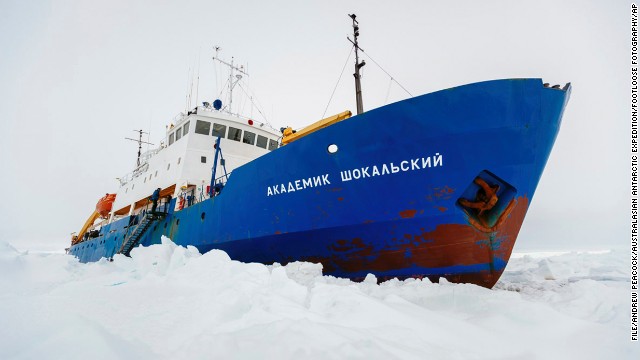 The ship MV Akademik Shokalskiy stays stuck, as its passengers fly away in helicopters.
January 2nd, 2014
05:17 AM ET

5 Things to Know for Your New Day - Thursday, January 2

Finally free! Passengers on a ship stuck in Antarctica board a helicopter, Terri Schiavo's family tries to help keep Jahi McMath on a respirator, and Uncle Phil of "Fresh Prince" takes his final bow.

1. ANTARCTIC SHIP
"Survivor," deep-freeze style: If the research ship stuck in the ice near the South Pole were an episode of "Survivor," all the candidates just got voted off. And they’re giddy about it. When a Chinese helicopter came whoop-whoop-whooping up to the Russian-flagged ship today in Antarctica, expedition leader Chris Turney was exuberant. Who wouldn’t be if they’d been stuck in a ship since just before Christmas Eve? The first passengers have already taken to the skies. But this is just the first leg of the trip home. It may be mid-month before they make it to Australia. The ship’s crew will stay on board.

Helicopter flying over to check out helipad. May be leaving in an hour! #spiritofmawson

Poppy Harlow fills us in on the progress of the passengers' rescue at 6, 7 and 8.

2. UNCLE PHIL DEAD
Mr. Values, gone: Actor James Avery was like the dad most never had. He straightened up his wayward nephew in the 1990s show "The Fresh Prince of Bel-Air." Best known as his character Uncle Phil, he scolded Will on the show, and in so doing imparted common sense to a large chunk of America. It was his plan from the very first episode. “Will, we promised your mother you were here to work hard, straighten out and learn some good, old-fashion American values,” he said. Avery died Tuesday after complications from heart surgery. So long, Mr. Values. Thanks for the memories and the laughter!

The fact that Uncle Phil died makes me cry. RIP to one of the best onscreen fathers❤️ pic.twitter.com/iQInHw1ihq

3. WINTER WEATHER
Time to head for Florida: If you’re in the Northeast this week, be prepared to get pummeled. Really pummeled. A frozen mess could leave about a foot of snow on your doorstep. Top it off with howling gusts and sub-zero wind chills, and boy oh boy. If Long Island, New York, had mountains, you’d probably be able to ski there by the weekend. The National Weather Service has placed it under a blizzard warning until tomorrow afternoon, and driving will be dangerous once the snow hits. The wind is expected to whip the flakes through the air, making it hard to see. Good luck getting a flight out. About 900 have been canceled nationwide today.

As snow is starting to fall across SNE, make sure you review the winter weather safety rules: pic.twitter.com/NpszFCX5WO

Jennifer Gray tracks the frosty front at 6, 7 and 8.

4. PRIEST KILLED
Outpouring of love … and questions: The Rev. Eric Freed was loved by many. He was warm, down-to-earth and free from clerical stuffiness, those who knew him said. And with his death, a lot of questions remain. Was it a murder? Police suspect it could be. But who killed him and why? Authorities are hoping an investigation will provide answers. The Catholic priest taught at California’s Humboldt University for years. "He was a really, genuinely warm individual," said professor Stephen Cunha, chairman of the university's religious studies.

Wow, RIP Rev Eric Freed. He was my teacher roughly 10 years ago. This is such sad news: http://t.co/H0OS8hYHT3

5. JAHI McMATH
Terri Schiavo’s family joins fight: Terri Schiavo’s parents know all too well what Jahi McMath’s family is going through. They brought a team of experts with them to fight to keep the 13-year-old on life support after doctors declared her brain dead. The hospital she is in wanted to remove the respirator, but her family says she’s alive, responding to their voices and touch. They have talked about finding another health care facility that sees eye-to-eye with them, the way the Terri Schiavo Life & Hope Network does. Schiavo’s family went through the same battle with their daughter eight years ago and is lending the resources it shored up back then to other cases like theirs and the McMaths'. Jahi’s family has accused the hospital of not cooperating with the plan, but it says the family has failed to find a doctor who will help transport what it calls a dead body on a ventilator.

Slaaaaaaam duuuuuuunk! Talk about a long shot. We’ve all seen basketball miracles where players shoot arching shots into buckets half a court or even a full court way. But from a tower 500 feet high into a goal on the ground?? Two guys ran with the goal to meet the plummeting ball. Still, the shot’s amaaaaazing.

Floating on thin air(waves): David Copperfield it ain’t. These suspended objects are no optical illusion. They are actually hovering in mid-air, no strings attached. Call it the science of sound. Specially adjusted audio waves are making them twist and dance in midair.

It’s a plank; no, it’s a plane: No, it’s some guy playing Superman flying up a department store escalator. And cracking a couple of guys up in the process, who couldn’t help but whip out a cell phone camera and share the goofy moment with the rest of the world.

Crop circle decrypted: That crop circle in California? Well, the farmer got sick of it - or the shutterbugs hovering on its edges - and mowed it down. But before he did, someone deciphered its message, which was written in braille, affiliate KSBW reports. Here it is: “192 192, B 192 1, 192 192.” Hmm. You can go ahead and scratch your head.

News wrap news rap: Didn’t get enough of the news last year - and like to boogie, too? YouTube rapper DeStorm catches you up on what went down in 2013 in less than five minutes with a hip tune you can hop to.