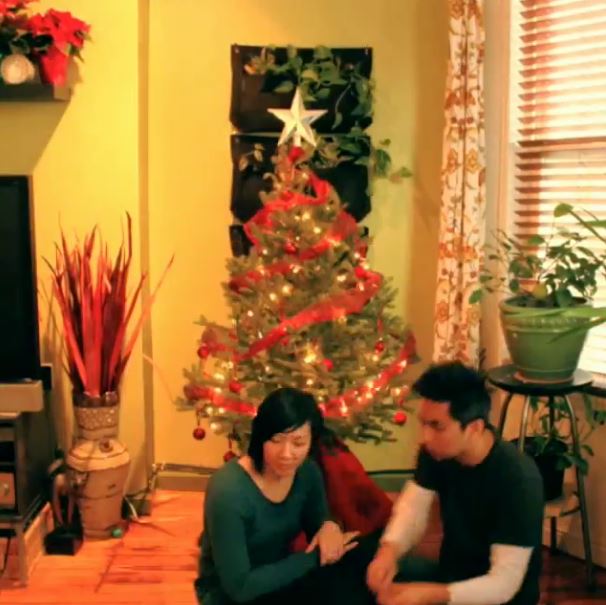 I love, love, love family traditions – especially over the holidays. Some of my family's traditions over the years have included: dad reading "The Night Before Christmas" with several goofy voices, searching for the secret ornament to win an extra gift, mom staying up to wrap gifts all night long and then dozing through gift-opening, and mom's special rack of lamb dinner to top it off. Oh, the memories!

Thank you so much for sharing some of your traditions. It has been so fun to see the creativity and diversity you all brought to the #HolidayTradition challenge. We saw wreaths, advent candles, holiday light shows, lots of sweet treats, and even cats in hats. Clearly you've all been busy getting ready.

This week's winner is @rickhodesigns (VIDEO BELOW). Rick says he and his wife moved east six years ago and in this awesome Instagram video, he shows us a time lapse of the couple decorating their tree in Brooklyn, New York. Thanks for letting us in on your new family tradition Rick! How did you pull off the time lapse? Happy holidays and congrats on the beautiful tree.

@rickhodesigns, I'm posting your image to my Instagram feed, the “New Day” Instagram feed and on our website, NewDayCNN.com. Also, our “New Day” digital team will be in touch to send along a little thank you!

END_OF_DOCUMENT_TOKEN_TO_BE_REPLACED

For two Americans, Christmas Eve will be celebrated in outer space.

In orbit more than 200 miles above the planet, Flight Engineers Rick Mastracchio and Mike Hopkins are set to embark on a spacewalk to repair part of the International Space Station's cooling system.

It will be the second Christmas Eve spacewalk in history, according to NASA.

Here on Earth, astronaut Mike Massimino—who has performed four spacewalks himself—explains how the astronauts are setting up for the endeavor.

“Both of the astronauts are out there, making sure their tethers are good, and they’re getting in position to start their day's activities,” Massimino says.

The two engineers will be carrying out the second in a series of expeditions needed to replace a malfunctioning pump, which circulates ammonia through loops outside the station to keep equipment cool.

The pump developed problems December 11, when an internal valve stuck in an incorrect position. The space station's life support system remains up and running, but operations were cut back as a result of the failure, NASA said.

The two astronauts spent about five and half hours outside the space station on Saturday working to remove the problematic pump.

Massimino describes the difficulty of their task.

“It is a completely different environment,” he says. “The suit, the tools are different. Things float around. You have to constantly check your suit and make sure that’s all good. That makes it a little more challenging. But it’s also a lot of fun.”

If everything goes according to plan, the repair job will be completed today.

A federal judge in Utah has denied the state's request to stay his ruling allowing same-sex marriage there.

“It's a victory nine years in the making- since the state's ban in 2004, Utah now joins the nation's capital and 17 other states that have legalized same-sex marriage,” reports CNN’s Miguel Marquez.

Nicole Christensen, 28, and her partner, Natalie Dicou, 32, were among those who tied the knot.

"It's incredible. It's like an early Christmas present," Christensen said. "I've been on Cloud 9 ever since we got married on Friday."

Shelby said lawyers for the state had offered no evidence that opposite-sex marriage would be affected and that their "fears and speculations are insufficient to justify the State's refusal to dignify the family relationships of its gay and lesbian citizens."

“On the heels of this dramatic development in Utah, a federal judge ruled that Ohio must recognize gay marriages on death certificates, though,” Marquez says. “That state joining in the challenge against same-sex marriage bans.”