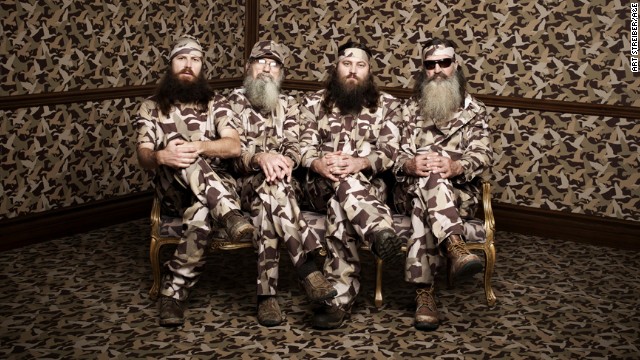 The Duck Dynasty family is standing together after the recent controversy. But will the show survive?
December 20th, 2013
05:02 AM ET

5 Things to Know for Your New Day – Friday, December 20

The Duck Dynasty family is standing by their man, Obama sends troops to an African conflict and more than 40 million Target shoppers may want to check their credit card statements.

Rumpled feathers: Will A&E's popular reality show "Duck Dynasty” survive this? The family behind the show broached that question yesterday. They released a statement backing patriarch Phil Robertson, one day after the network suspended him over controversial remarks he made about gays and blacks. "While some of Phil's unfiltered comments to the reporter were coarse, his beliefs are grounded in the teachings of the Bible,” the Robertson family said. The statement went on to question the future of the reality show. "We are disappointed that Phil has been placed on hiatus for expressing his faith, which is his constitutionally protected right. We have had a successful working relationship with A&E but, as a family, we cannot imagine the show going forward without our patriarch at the helm. We are in discussions with A&E to see what that means for the future of Duck Dynasty." Whoa. This all stems from just released interview with GQ magazine when Robertson said homosexuality is a sin and seemed to put it in the same category as bestiality and promiscuity. The debate from Robertson’s statements has been intense.

I'm really learning a lot about some of my Facebook friends during this whole duck dynasty debacle. #blocked

Nischelle Turner will give updates on this story.

Crumbling ceiling: A real life drama unfolded yesterday at London's historic Apollo Theatre. Part of the century-old structure's ornate plaster ceiling tumbled five stories. Dozens were injured –seven seriously. The panic occurred during a play, a mystery called the "The Curious Incident of the Dog in the Night-Time." About 40 minutes into the play, one of the actors yelled “Watch Out!” Some thought it was part of the play. It wasn’t. A loud creak followed, and the ceiling began to come down. Officials said none of the injuries appeared life threatening. Now the mystery is what caused the collapse. Police say it was an accident and not deliberate but it will take engineers to really determine the true cause.

Erin McLaughlin will be live on this story.

At the precipice: President Obama weighed in on the conflict in the South Sudan as deadly clashes spread in Africa’s newest nation. Obama spoke yesterday as the government in South Sudan said rebels have taken the town of Bor. "In 2011, millions of South Sudanese voted to forge a new nation, founded on the promise of a more peaceful and prosperous future for all of South Sudan's people," Obama said in a statement. "In recent years, against great odds, South Sudan has made great progress toward breaking the cycle of violence that characterized much of its history.Today, that future is at risk. South Sudan stands at the precipice. Recent fighting threatens to plunge South Sudan back into the dark days of its past," the President said. Amid violence this week, Obama sent 45 U.S. service members to South Sudan. In a letter to Congress, he said the troops were deployed "to support the security of U.S. personnel and our Embassy."

Without child protection in #southsudan conflict,there might be a war within a war.

Meanwhile, violence is raging in the Central African Republic as well. Samantha Power, a top U.S. diplomat with an expertise in genocide, arrived there yesterday to gauge sectarian unrest between Christians and Muslims. Amnesty International said former rebels in the Central African Republic killed almost 1,000 people in a two-day rampage this month.

Elise Labott will be live on this story

Massive: That’s probably a word you don’t want to hear when it comes before security breach. But unfortunately there was a massive breach of credit and debit card data at Target that could affect 40 million shoppers, the store said this week. This breach happened the three weeks after Thanksgiving. The Secret Service was called in to help. Yesterday, a company spokeswoman said it had resolved the security issue that allowed the information to be stolen.
The only problem is there has been no word on whether the thieves have been caught. And experts say the crooks can  make fake debit cards and withdraw cash using the information they stole from Target.

40M Target shoppers may be impacted by a credit card data breach: here's what you need to know. http://t.co/Os9GRCVwlz #fraudwatch

Target's security breach is worse than I 'd thought. I'd thought it only affected Target cards. It includes normal credit & debit cards.

Kevin Mitnick, a security professional, will join us 7 to talk about how consumers can protect themselves.

Murder trial: A Detroit man says he shot and killed a 19-year-old woman accidentally when she came to his porch. The victim’s family says the teen was desperately seeking help after being in a car crash, and was killed instead. Whatever the case, the Detroit man will have to stand trial for second-degree murder, a judge ruled yesterday. The judge said that there was enough evidence for Theodore Paul Wafer, 54, to face trial in connection with the November 2 shooting of Renisha McBride. The details of the case made national news earlier this year. McBride, authorities say was intoxicated and possibly disoriented after a car crash and made her way to Wafer’s porch that day. The two did not know each other. And McBride’s family says the teen may have been asking for help. Wafer has said he thought the teen was trying to break in and he went to the door holding a shotgun. He has pleaded not guilty in the case.

Susan Candiotti reports on this story.

- Parkour Santa: The mystery of how Santa gets to all those houses so quickly gets solved in this video.

- Another singing family: Last week we met the Holderness family and their viral song about Christmas pajamas. Now here comes this almost too happy Bock family and the soon to be viral holiday song.

- Upside down family: Talk about production value. The Slade family are veterans of viral video Christmas cards. Check this one out.

- Peanuts Mob: This one brings one question to mind. Do these people have jobs?

- Seal buddy: This guy becomes fast friends with a seal.