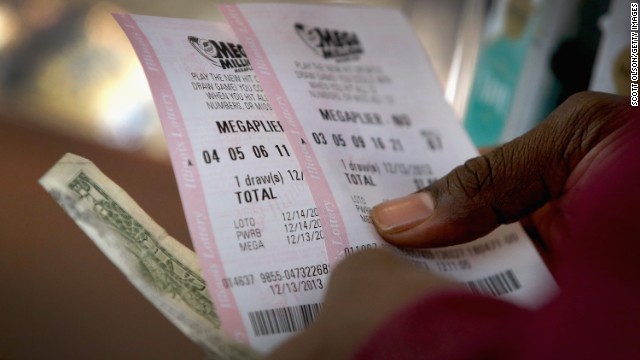 Time to check those lottery tickets. At least two people won the big Mega Millions jackpot, but there are other winners out there.
December 18th, 2013
05:00 AM ET

5 Things to Know for Your New Day – Wednesday, December 18

There are two new mega millionaires out there, a family fights to keep their daughter on life support, and a hoax might send a Harvard student to prison.

Mega happy: There are two happy people out there somewhere right now. After the Mega Millions lottery went without a winner several times and the jackpot jumped to an obscene $636 million, lottery officials say there are at least two people who matched the winning numbers last night. Just in case you wanted to check your ticket again, those numbers are 8, 14, 17, 20 and 39, with a Megaball of 7. One winning ticket was sold in Atlanta, and the other was sold in San Jose, California. What? You don’t live there? Check your ticket anyway. Twenty ticket holders will win $1 million after matching all the numbers except for the Megaball. Each year, about $800 million worth of lottery prizes are not collected. It happens all the time: Ticket holders hear the jackpot winner was in another state, and they don't bother to check to see if their ticket won a lesser prize. So, you still may want to check. Just saying.

Even if you were the only winner of tonight's Mega Millions, you wouldn't be able to finance the purchase of the avg NBA team, after taxes

Got two numbers plus the mega ball right on mega millions. $5 headed my way!

Alison Kosik and our team will give updates on this story.

Tragic: Who gets to decide when to end life support when a person is brain dead? That’s what a California family is asking as they desperately fight with a California hospital. The story is tragic. Thirteen-year-old Jahi McMath had her tonsils removed this month. But something went wrong during the surgery, her family says. The teen went into cardiac arrest and now is on life support and was declared brain dead. Some in the teen’s family feel that Jahi will recover. "I don't want her off life support because I really feel like she can wake up," Nailah Winkfield, the teen’s mother, told CNN. The problem is Jahi’s death has been reported to the coroner’s office and by law, the body has to be removed. Jahi’s family is fighting. They slapped the hospital with a cease-and-desist letter aimed at preventing it from taking her off a ventilator. And for now, the family says, they are praying.

Mother: I think Jahi will wake up http://t.co/RHLKALjXE6

Stephanie Elam is live on this story.

Not random: That’s what police were calling yesterday’s shooting at a medical building in Nevada. But other than saying the violent act was not random, little information was released yesterday. Not even the name of the shooter was released. What was known was that a gunman and another person were killed during the shooting at the Reno medical facility. The shooter died of a self-inflicted gunshot wound, police said. Two others were critically wounded. Late in the evening, the medical facility remained closed as police interviewed dozens of witnesses.

Saddened by tragic shooting at Reno's Renown Regional Medical Center. My heart goes out to the victims and their families.

hate when random mass shootings go down. thoughts are with those in Reno, NV

Miguel Marquez will give us the latest on this.

Great advice: A blind man and his black Lab service dog fell onto a New York subway track yesterday as a train approached but somehow were not seriously injured. How? Some are calling it a miracle. Witnesses heard the man, Cecil Williams, scream as he fell onto the tracks with the dog, named Orlando. Luckily, a transit employee was at the train station, officials said. The employee, described as a construction flagger, told Williams to lie still between the subway rails and not try to climb out. If he had tried to get up, things may have been much worse. The conductor applied the brakes when he noticed Williams on the tracks, officials said. But the train came to a stop only after one and a half cars went over the man and his dog.
Emergency crews removed Williams and Orlando, and amazingly, both were not seriously hurt. The man’s girlfriend said he fell because he fainted. "It's a miracle," she told CNN affiliate NY1 "I'm very grateful to God."

me and Nani just witnessed an old man slipping and falling with his dog on the train tracks and the train just ran over him and his dog.

luckily, the dog and the old man survived. please be careful.

Williams said that along with the transit worker, Orlando tried to save him. The problem is, Williams told The New York Times, he may have to give Orlando away because of insurance issues.

Michaela Pereira will be live on this story.

Not very smart: Maybe he will not have to take his final exams after all. Police say a 20-year-old Harvard University student who was dreading final exams sent in bomb threats this week. The threats caused a mass evacuation, a cancellation of tests and ultimately led to the suspect’s arrest. The suspect e-mailed the bomb threats Monday morning with a subject line that said "bombs placed around campus,” police said. The e-mails were sent through a service called Guerrilla Mail, which creates temporary and anonymous e-mail messages. There is a way that senders can hide their identity when sending these e-mails. But this suspect did not, police said. Authorities were able to trace the e-mails to the suspect’s Harvard wireless network. The student admitted to the e-mails to police and FBI on Monday night, authorities said, telling police he was afraid to take finals. The panic over exams could cost the student a maximum of five years in prison. He will be in court today.
https://twitter.com/wildlynothing/status/413201901845372928

Dumb + reckless, yes, but evil? No. The Harvard kid who called in the bomb threat shouldn't get jail time...stress makes ppl do crazy things

Jean Casarez will update us on this story.

- Talking boat: Just imagine being stuck behind this boat in holiday traffic.

- Xmas mystery: This man tries to figure out who damaged his Christmas tree. The suspects are tight-lipped.

- Explosive tree: This is one tree you can’t keep in the house.

- Misunderstood teen: This story of a teen who seems too busy on his phone to notice the holidays was going viral this week and almost doesn't seem like an ad. It may bring a tear to the eye.